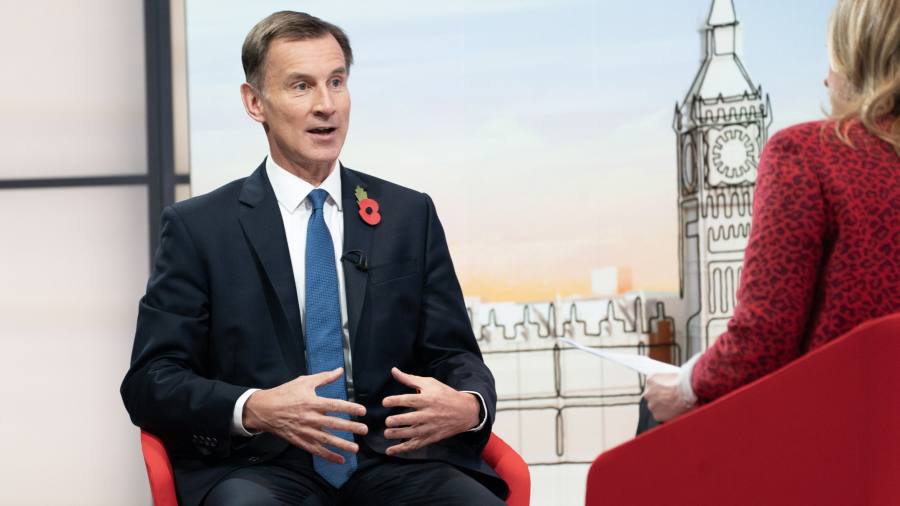 UK chancellor Jeremy Hunt warned on Sunday that “everyone” will be paying more tax after his Autumn Statement, as he also said he was preparing significant cuts to public spending.

Hunt is expected to set out tax rises and spending cuts worth about £55bn a year as he seeks to fill a gaping hole in the public finances and regain UK fiscal credibility after former prime minister Liz Truss’s disastrous “mini” Budget in September.

He said he would be announcing wide-ranging tax rises in his Autumn Statement on Thursday but insisted his programme to repair the fiscal hole would be done fairly.

Hunt said he would outline on Thursday the government’s new plan for helping households with energy bills from April.

The government at present caps all households’ energy bills, but from April support is expected to be focused on pensioners and vulnerable households.

Hunt conceded the UK economy was facing “very choppy waters” and had probably already entered a recession. “We want to do everything to make this recession we appear to be in as short and shallow as possible,” he said.

But he rejected calls not to raise taxes and cut spending amid the economic downturn, saying his primary goal was to demonstrate that the public finances were on course to lower the UK debt burden.

“Sound money has to come first,” he told Sky News. “We have had a very big deterioration in the public finances.”

The chancellor said he would aim to help keep interest rates lower, allowing the Bank of England to tighten monetary policy less than it would otherwise have to do in response to high inflation.

“We need to do something that shows we’re getting back to a low-inflation society,” he said.

Hunt also acknowledged the UK economy was suffering compared with its peers from the effects of Brexit, although he downplayed its importance. “I don’t think that’s the biggest issue [facing the UK economy],” he said.

Labour said the Conservatives were to blame for many of the issues confronting ministers. “A lot of these problems are because of the mistakes the government has made,” said shadow chancellor Rachel Reeves.

She added that a Labour government would “make our tax system fairer and grow the economy”, which would be paid for partly by windfall taxes. Reeves said Labour would not increase income tax to pay for its plans.