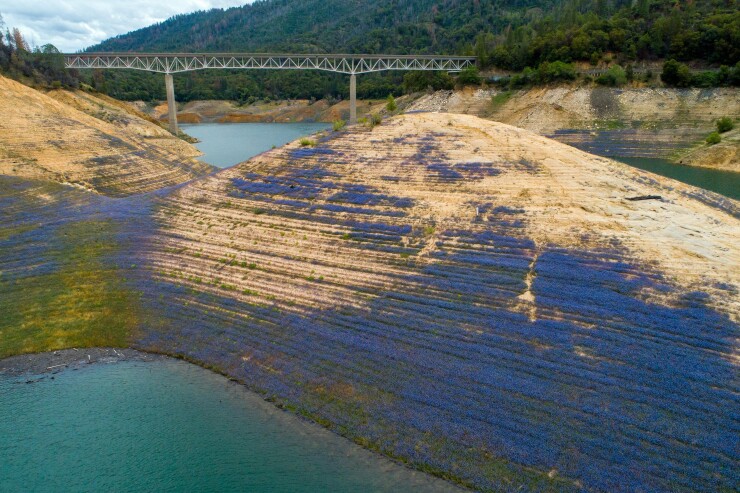 As drought conditions worsen in California and other western states, rating analysts are weighing the potential impacts.

California state water officials announced during a media call Tuesday that the governor plans to increase his budget request for state conservation efforts after the state’s residents failed to heed his request in March to reduce consumption, instead increasing usage by 19% compared to the same month in 2020.

Gov. Gavin Newsom plans to add an additional $180 million for a total of $300 million when he releases his revised proposed budget on Friday, said Lisa Lien-Mager, a spokeswoman with the California Department of Water Resources. The money will go for smaller water suppliers, drought relief, urban water management grants and a $100 million statewide advertising campaign to encourage water conservation.

In California, most rain falls in the winter and in the months on either side. After some encouraging rain in late 2021, January, February, and March had the least rain and snow on record for any of these months in California, according to state records. That puts California firmly into a third year of drought; the year ending on Sept. 30, 2021, was the second driest since records have been kept.

Jones asked each agency to estimate their available supplies for the next two years and that information was put through a stress test. If the agency didn’t pass, they would be asked to cut back.

She pointed to San Diego as an example of a water agency that has invested a lot in conservation, emergency storage as well as building a desalination plant to reduce its dependence on imported water.

“They did it at a cost to ratepayers, but they stand head and shoulders above the other agencies,” Jones said.

When drought struck earlier in the decade when Jerry Brown was governor, he set mandatory statewide cuts, and it resulted in a drop in usage.

“We believe the weaker results with respect to demand result from [Newsom’s] somewhat lighter touch (voluntary) policy, but even more so to the fact that conservation is more challenging on the margins,” said S&P Global Ratings analyst Jennifer Poree, who is sector lead for water and power in U.S. public finance. “The state made significant strides in landscape, appliance efficiency and behavior during the last drought and additional incremental benefit is harder to obtain.”

In contrast, Nevada has implemented mandatory reductions, including pricing penalties, and the Legislature has passed laws eliminating ornamental lawns and implemented a policy for large water users, Poree said.

“Nevada has more of a carrot-and-stick policy,” Poree said. “The state has been successful at reducing water consumption even given how fast its population is growing.

“We tend to think the financial penalties for higher water use are more impactful vs. ‘you are in trouble, your neighbor saw you watering your lawn,’” she said.

During the five year-drought ending in 2016, Brown imposed mandatory statewide cuts of 25% in California, with each water agency required to cut 4% to 36% based on gallons per person per day consumed, according to a Fitch Ratings report published in September. “Water utilities responded by increasing the fixed component of rate structures, increasing rates overall, and/or making continued significant investments in increasing water storage and diversification of supplies,” Fitch said.

Though many utilities experienced one or two years of reduced financial margins during the previous drought, Fitch said steps taken resulted in rebounds for most, and the rating agency didn’t take any negative actions on water utility credits.

Most of the water agencies S&P rates also came into the drought well protected with two times debt service coverage and almost a year of cash on hand, Poree said.

She expects that agencies will start to cut into those reserves to avoid raising rates as affordability becomes more of an issue.

Increasing rates to pay for alternative energy projects while residents are asked to conserve water is creating some “sticker shock,” Poree said.

“We are focused on the affordability question,” she said. “There will be a softening on coverage, because management has to balance affordability against the cost of projects to deal with climate change.”

S&P analysts are working on an update to a Western drought credit analysis they released last year. They are evaluating the pressures on California water agencies wrought by the cuts to water allocations from the State Water Project that funnels water from northern California to Central and Southern California urban and agricultural users and also from Colorado River restrictions.

Both Moody’s Investors Service and S&P pointed to irrigation districts as a weak spot.

S&P revised its outlook to negative from stable Oct. 29 on the 20 irrigation districts in California it rates.

The irrigation districts serve farms in the Central Valley “that are most at risk from the state water allocation cuts as well as groundwater restrictions and the rising cost of environmental protections,” Poree said.

The drought’s impact “will be felt more severely in parts of the state that are heavily dependent on the agricultural sector as surface water deliveries are curtailed,” Moody’s analyst Maddie Atkins wrote in an April 20 report.

But the affect will be less for bondholders as Atkins notes that “most water enterprise debt is concentrated in urban areas. Thus, while the drought poses an above-average risk for agricultural communities, the overall exposure for most water revenue debt remains low.”

S&P will also be tracking the six southern California water agencies that will be affected by the water mandate that Metropolitan Water District of Southern California, the region’s massive water wholesaler, just implemented. If its 26 member water agencies exceed monthly allocation limits, they will be fined $2,000 per acre foot.

The mandate requires that member agencies restrict outdoor irrigation to one day per week beginning June 1. The general manager also is authorized to ban all non-essential outdoor irrigation or enforce volumetric limits should conditions warrant as the year progresses.

“We view it favorably that Met is getting in front of it,” Poree said.