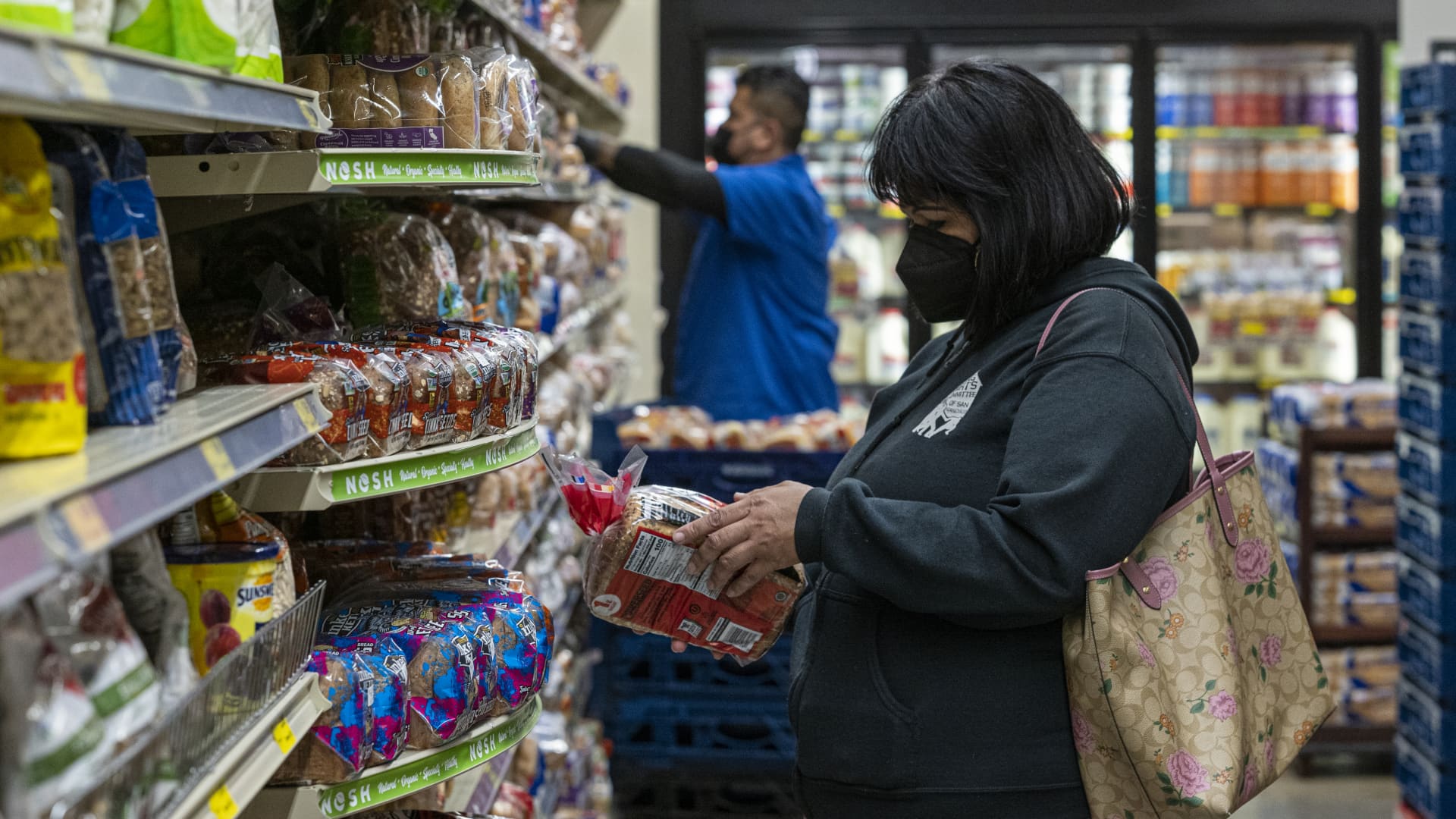 April’s consumer price index report is expected to show inflation has already reached a peak — a development that some investors say could temporarily soothe markets.

But economists say, even with a reprieve in headline inflation, core inflation could gain on a monthly basis and stay elevated for months to come. Core inflation excludes food and energy costs.

The CPI report is expected to show headline inflation rose 0.2% in April, or 8.1% year-over-year, according to Dow Jones. That compares with a whopping 1.2% increase in March, or an 8.5% gain year-over-year. The April data is expected at 8:30 a.m. ET Wednesday.

Stocks gyrated Tuesday ahead of the much-anticipated data. The S&P 500 ended the day with a 0.25% gain, and the Nasdaq added 0.98%. The Dow Jones Industrial Average lost 84.96 points.

The closely watched benchmark 10-year Treasury yield retreated to about 2.99% Tuesday after a sharp run up to 3.20% Monday. Bond yields — which move opposite price — have been running higher at a rapid pace on expectations of aggressive Federal Reserve interest rate hikes.

“I wouldn’t say tomorrow’s CPI matters by itself. I think the combination of March, tomorrow’s and May’s data will kind of be the big inflection point,” said Ben Jeffery, a fixed income strategist at BMO.

But Jeffery said the report has a good chance of being a market mover, no matter what.

“I think it will either reassert the selling pressure we saw that took 10s to 3.20% … Or I think it will inspire more dip-buying interest for investors who have been waiting for signs that inflation is starting to peak,” he said.

A potential turning point for stocks

In the stock market, some investors say the data could signal a turning point if April’s inflation comes in as expected or is even weaker.

“I think the market, from a technical standpoint, is very focused on trying to divine how much the Fed is going to move,” said Tony Roth, chief investment officer at Wilmington Trust Investment Advisors.

A hotter report would be a negative since it could mean the Fed will take an even tougher stance on interest rates. Last week, Fed Chair Jerome Powell signaled the central bank could hike rates by 50 basis points, or a half-percent, at each of the next couple of meetings.

The market has been nervous about inflation and that the Fed’s response to it could trigger a recession.

“I don’t think this is the end of the drawdown in the market … The market needs to go down 20% at a minimum. If we get a series of better inflation data, then I think 20% could be the bottom,” Roth said. The S&P 500 is off nearly 17% from its high.

“If the inflation data is not as good as we think it will be, not just this month but consecutive months, then I think the market prices for a recession, and then it’s down 25% to 40%,” said Roth.

Roth said there are two potential exogenous risks in inflation data, and either could prove to be a problem for markets. One is the unknowns around the oil and gas supply strains and price shocks caused by Russia’s invasion of Ukraine, and the other is China’s latest Covid-related shutdowns and the impact on supply chains.

“Nobody knows how they’re going to play out … Either one of these could be a bigger problem than the market is anticipating right now,” Roth said.

Aneta Markowska, chief financial economist at Jefferies, said she is expecting a hotter-than-consensus report, with 0.3% gain in headline CPI and a 0.5% jump in core. She thinks the market’s focus is wrong and investors should be concerned more with how much inflation can decline.

“I think a lot of folks are focusing on the year-over-year rate slowing, and I think that helps consumers because it looks like real wages will actually be positive for a change in April on a month-over-month basis,” she said. “But if we get that acceleration in core back to 0.5% that we are projecting, that’s a problem for the Fed. If you annualize that, you’re running at 6%, and that would really mean no slowdown.”

Markowska noted the central bank assumes inflation will slow to 4% this year and 2.5% next year. “The question we have to ask is are we on track to hit that forecast and if not, the Fed could have a bigger policy overshoot than they envisioned,” she said.

The perception is that inflation problems are supply chain-driven, but those issues are going away, Markowska added.

“I think that ship has sailed. We’re past supply chains. This is the services sector. This is the labor market,” she said. “Just because we peak and core goods inflation is coming down, that doesn’t fix the problem. The problem is now everywhere. It’s in services. It’s in the labor market, and that’s not going to go away on its own … We need core inflation to get down to 0.2%, 0.3% month-over-month pace, and we need it to stay there for a while.”

Barclays U.S. economist Pooja Sriram said she does not think investors should get too excited about inflation peaking, since what will matter is how quickly the level comes down.

“For the Fed to be pacified that inflation is coming down, we need to get a really weak core CPI print,” she said. “Headline CPI is going to be hard to come down because the energy component is swinging.”

The energy index was up 11% in March, and it may be less of a contributor to overall inflation in April because gasoline prices fell. Economists say energy will be a bigger issue in May data, since gasoline is rising to record levels again.

Some economists expect used-car prices will come down in April, but Markowska said data she monitors shows increases at the retail level.