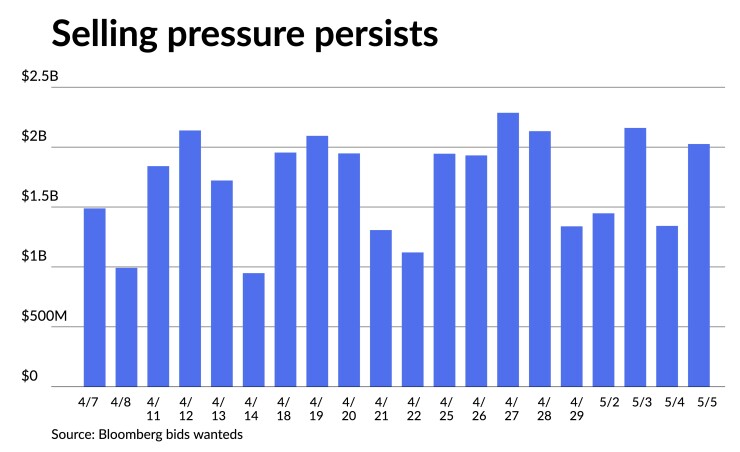 Municipals were weaker amid more selling pressure to close out the week, U.S. Treasury yields rose with the 10-year sitting firmly above 3% and equities ended in the red.

Triple-A muni benchmarks were cut up to four basis points while UST yields rose five to 10 basis points five years and out.

Ahead of next week’s $6.63 billion issuance, the municipal market continues to be led by the macro effects — overall rising interest rates and massive volatility since the beginning of the year, according to John Farawell, managing director of municipal underwriting at Roosevelt & Cross.

“We continue to have outflows from the funds and that adds to the pressure,” he said, but at the same time, municipal to Treasury ratios and the nominal yield levels are “extremely attractive,” which is generating some renewed interest among the retail crowd.

“We are starting to see some retail come back into the municipal market that we haven’t seen in a while because nominal yields are so attractive,” Farawell said.

The Fed rate increase this week did not surprise participants, but he said investors might be questioning the amount they raised rates.

“They did the 50 as expected, and [Powell] seemed to be saying the right type of things, but then all of sudden when the market started to reevaluate what he said they questioned whether he should have done 75 and not 50, and we sold off big time,” Farawell said.

“I think a lot of people are still questioning the Fed, and the fact that they are late to the game,” he added, noting that the Ukraine crisis continues to add the already troubling supply chain pressure and rates.

“The question is, by raising rates can they control inflation,” he added. “In terms of a soft landing, it seems like the economy definitely has some pressure moving forward after they raise rates.”

Supply ticks up
Investors will be greeted Monday with an uptick in supply, albeit still on the lighter side of historicals. The new-issue calendar reaches $6.631 billion with $5.410 billion of negotiated deals and $1.221 billion of competitive loans.

Wisconsin is expected to sell $183 million to lead the competitive calendar, along with the Orange Unified School District, California, with $100 million.

“The muni market’s improvement thus far in May has been less than expected, as mutual fund outflows persist and long-term Treasury rates remain volatile,” noted BofA strategists Yingchen Li and Ian Rogow in a weekly report.

“New buyers in tax-exempt munis are more active in the short maturities, including money market and short-call bonds, while long-duration bonds need to price cheap in the primary market,” they said. “Hopefully, the lighter-than-feared Fed quantitative tightening plan will help to stabilize long-term Treasury rates and give muni duration investors some forward clarity.”

For the market to see a much-needed turnaround, rates need to stabilize, according to Barclays PLC.

They also point to fund outflows as an ongoing still be a problem for the market.

“If we go by what happened in 2013, the market environment that resembles what happens in the muni space this year, fund outflows continued for quite some time even after rates stabilized, although peak outflows occurred only during the months of the largest Treasury yield increases,” they wrote.

While they don’t see “outflows stopping on a dime, if they become smaller, they will start having a smaller negative effect on the municipal market.”

Barclays strategists still “see current weakness as an opportunity to add, but are cautious with longer-duration assets and much rather prefer bonds in the belly of the curve, possibly trading down in coupon.”

They continue to believe “that investors might find good value in taxable munis.” But, with corporates under pressure, “as concerns about a possible recession have intensified,” they said “wider credit spreads have also put pressure on taxable munis.”

After trading well through taxables in April, Barclays strategists said, “corporate spreads are now actually trading wider, which makes them less attractive for crossover investors, while foreign investor appetite for taxable municipals has been negatively affected by higher hedging costs.”

“All of the above makes it harder for taxable muni spreads to perform well in the current market environment, but we are still hopeful longer term,” they said.

Jobs report
Analysts had no clear consensus on the employment report, which showed 428,000 jobs added, an unemployment rate steady at 3.6%, labor force participation down two-tenths of a point, and average hourly earnings on an annual basis slightly below March’s level.

The data are “consistent with job openings and quits data that point to robust labor demand amid limited supply and largely reaffirms the Fed’s hawkish pivot,” said Mickey Levy, Berenberg Capital Markets’ chief economist for the U.S. Americas and Asia, and a member of the Shadow Open Market Committee.

The wage data, while hinting “the pace of nominal wage growth may have begun to moderate,” he said, “remains elevated at a level inconsistent with the Fed’s 2% inflation target.” But wage growth should “remain elevated but potentially ease in the coming months,” given there are nearly two jobs available for each person seeking work.

And while one month could be a distortion, Levy said, “the moderation in measures of labor market activity in April and the deceleration in nominal wage growth over the last three months are likely to be welcomed by the Fed.”

Should this continue, it “would raise the probability the Fed will be able to tamp down on inflation and inflationary pressures without tipping the economy into a recession.”

But even if the economy were to slip into recession, National Association of Realtors Chief Economist Lawrence Yun said, “it would be unique because of the tight job market.” Labor market tightness “is one of the factors contributing to higher inflation,” he said. As such, expect “many more rate hikes.”

“The ratio of job openings to workers is expected to hit 1.8 in April, matching the second-highest level on record,” said Grant Thornton Chief Economist Diane Swonk. “That is not exactly reassuring to the Federal Reserve, which is looking for that ratio to drop close to one-to-one.”

The strength of the employment sector is “adding to inflationary pressures.” And while Federal Reserve Board Chairman Jerome Powell said he hoped to curb “inflation without a ‘significant’ increase in unemployment,” she said, “hope is not the same as reality.”

The Fed will remain “in a hawkish mood,” said DWS Group U.S. Economist Christian Scherrmann. The only weakness he saw in the report was the 2,000 construction jobs added in April, 20,000 less than the month before.

“But despite the overall surprise in job creation, wage pressures did not accelerate — though they remained at very high levels,” Scherrmann said.

But the question that needs to be answered, he said, “is whether the fading dynamic in wage growth is the first sign of a slight cooling in the labor market.”

Still, it should get harder to add jobs at this point, said Morning Consult Chief Economist John Leer. “First, job growth tends to naturally slow over time toward the end of a strong economic recovery.” Also, the Fed rate hikes will impact employment gains in a few months, he said

Possible hints of slowing job growth, said Scott Anderson, chief economist at Bank of the West, were the unemployment rate holding at 3.6% when economists expected a dip to 3.5%; and a drop in the labor participation rate to 62.2% from 62.4%, when economists predicted a rise.

“If this labor market shrinkage is sustained in the months ahead, it will make it harder for the U.S. labor market to continue to outperform on job creation every month and could even accelerate the decline in the U.S. unemployment rate,” he said. “This could force the Federal Reserve into the uncomfortable position of having to tighten monetary policy even more forcefully in response to a labor market that is so clearly overshooting ‘full employment’ for fear that it could further stoke already elevated inflation expectations or lead to a wage-price spiral.”

While earnings rose 0.3% in the month, David Page, head of macro research at AXA Investment Managers, said, “the monthly pace has been volatile and subject to revision — there is no obvious trend deceleration here yet.” While wage growth doesn’t appear to be accelerating, “there is only tentative evidence that it is receding.”

No matter what the May employment report says, it is unlikely to derail the next 50 basis point rate hike. But there will be two employment reports before the FOMC’s July meeting, Page noted.

“On balance, we see insufficient development to stall that hike either,” he said. “But we will watch to see whether a broader deceleration in activity, evident in Q1 GDP and a wider range of metrics, begins to more obviously show up in labor market data as we go into the summer.”

Should a slowdown occur, “it would not only merit a change of gears from the Fed, to 0.25% hikes from 0.50%, but ultimately we believe will necessitate an outright pause to stop efforts to remove excess demand from the system turning into pushing the economy into a more meaningful slowdown,” Page added.

The School Board of Broward County, Florida, (Aa3//A+/) is set to price Tuesday $151.020 million of certificates of participation, Series 2022B. Morgan Stanley.

January job growth is forecast to slow slightly, but the impact from big corporate layoffs is uncertain
4.5-Acre Oceanfront Maui Property Hits The Market For $5.5 Million
Panel discusses benefits of ESG disclosure
Salt Lake City, Dallas And Denver Are Expected To Have The Biggest Inventory Gains In 2023
Uzbekistan Collects Over $300,000 From Crypto Sector