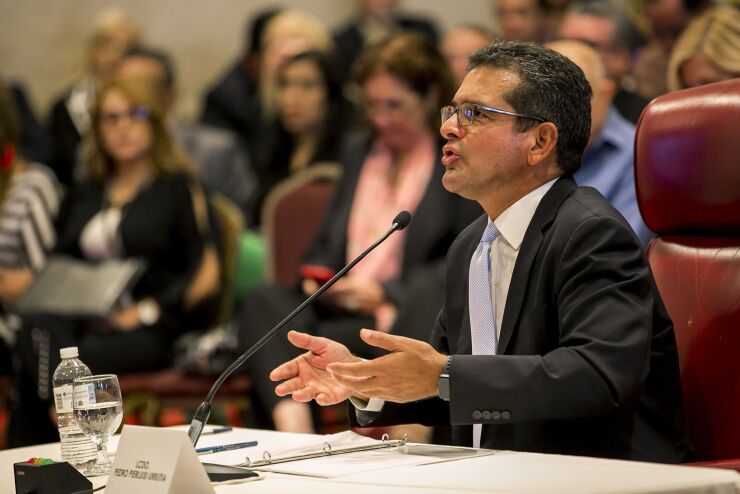 Puerto Rico Gov. Pedro Pierluisi halted collections of a gasoline and diesel tax for 45 days, in a step that may lead to conflict with the Oversight Board and may run afoul of a revenue provision in the bond restructuring law.

Pierluisi signed the moratorium late Tuesday. In late March, Board General Counsel Jaime El Koury expressed preliminary opposition to what was then a bill in the Puerto Rico Senate that would freeze collections because he expected the measure would affect $25 million of collections.

The possible confrontation on this issue follows several weeks of the governor urging the board to allow him to use emergency financial reserves to offset electrical price increases for the public because of higher fuel costs. The board repeatedly rejected this.

The Oversight Board said it was reviewing the legislation and may have a further comment on it.

The moratorium on the gasoline and diesel tax, called the “crudita,” is limited to affect no more than $25 million, the governor’s press office said. Puerto Rico’s Joint Subscription Association will provide the General Fund $25 million by the end of the fiscal year as compensation.reviewing the legislation

In October 2021, the local government passed Act 53-2021, which authorized the issuance of the restructured bonds. The new law specified that as of March 15, when the bond restructuring occurred, the “crudita” revenues were to go to the General Fund.

Pierluisi said, “Puerto Rico, like other jurisdictions, has been affected by the war between Russia and Ukraine. I am signing this measure to alleviate, albeit temporarily, the impact on citizens’ pockets due to the increases reflected in the price of oil and diesel oil, and I am doing so with duly identified repayment sources.

“Both the Treasury and Department of Consumer Affairs must ensure that the savings in the tax on crude oil reach the consumer and in the next 15 days or before, the Secretary of the Treasury, Francisco Parés, must report compliance with all the steps taken to reduce the impact of this tax on the population,” Pierluisi said.

In other financial news, the Puerto Rico Department of the Treasury announced Wednesday that March net General Fund revenues came in 9.9% higher than board’s January 2022 projection for the revenues.  They also came in 8% higher than the March 2021 net revenues.