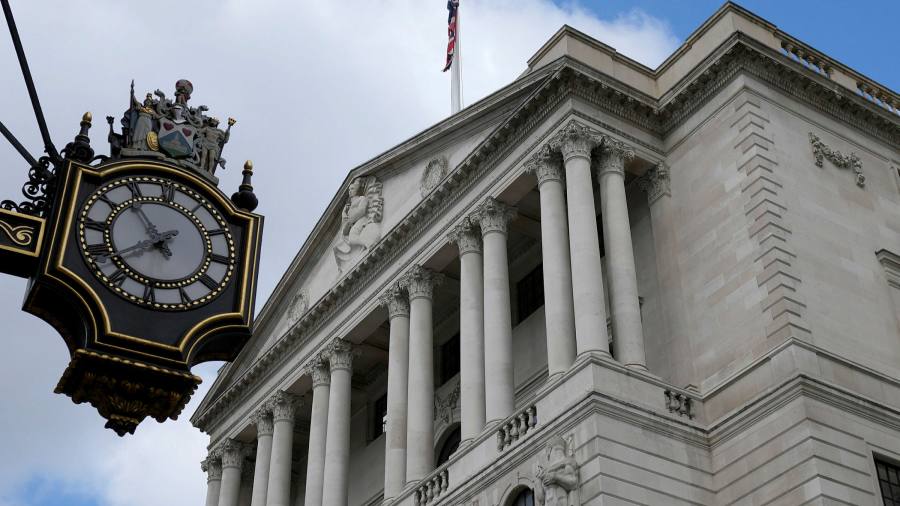 The Bank of England has warned that the UK economy will slide into recession this year as higher energy prices push inflation above 10 per cent, a forecast that pushed sterling to a two-year low.

Rising prices would cause the worst squeeze in household finances for many decades, the bank’s Monetary Policy Committee said as it voted on Thursday to raise the main interest rate by a quarter-point to 1 per cent, its highest level since February 2009.

Three of the nine MPC members voted for a half-point rate increase.

The pound, which was already down ahead of the BoE announcement, slid to a two-year low, trading 1.8 per cent lower against the dollar at $1.2397. The 10-year gilt yield fell 0.09 percentage points to 1.88 per cent.

In tightening monetary policy, the committee members decided that this winter’s surge in gas and electricity prices would not cause enough financial pain to bring inflation sustainably back under control, so additional action to raise borrowing costs and damp spending was needed.

The MPC said it was “unable to prevent” UK households from becoming worse off and its role was to ensure inflation came down to its 2 per cent target sustainably in the medium term.

The message for households suffering a cost of living crisis was less aggressive on interest rates than financial markets had expected, with inflation being forecast to fall well below the BoE’s target if it followed traders’ expectations that rates would rise to 2.5 per cent by the middle of next year.

Instead, most MPC members signed up to a statement that said: “Some degree of further tightening in monetary policy might still be appropriate in the coming months.” Two members of the committee thought this guidance that interest rates needed to rise further “was not appropriate”.

Speaking of the squeeze on households forecast by the BoE, its governor Andrew Bailey said: “I recognise the hardship that this will cause.”

The committee also decided not to follow the US Federal Reserve and start active sales of the £875bn of assets that the BoE built up under its quantitative easing programmes since 2009, preferring instead to “work on a strategy for UK government bond sales” that would start at the earliest in August.

Unlike the Fed, the BoE was not confident it could engineer a soft landing for the economy while also bringing inflation down to its 2 per cent target. Instead, unusually gloomy BoE forecasts predicted a recession by the end of the year as gas and electricity costs rise another 40 per cent when the new price cap for most consumers is set in October.

It said these rises in energy bills were likely to push inflation up to 10.2 per cent in the fourth quarter of 2022, the highest in 40 years, slash real household incomes because wages would not keep pace and result in UK gross domestic product falling 1 per cent in the quarter.

Another dip in GDP was likely in the third quarter of 2023, the BoE added, when the government’s temporary incentives for business investment ended, leaving the economy 0.8 per cent smaller than in the summer of 2022.

Unemployment, it said, would rise from 3.8 per cent to 5.5 per cent by 2025 and this would help moderate wage claims and bring down inflation.

Thereafter, the MPC now expects the UK economy to recover only weakly from the coming recession, suggesting that the economy could not withstand growth of much more than 0.6 per cent a year without inflation taking off again.

This persistent weakness, the BoE said, reflected “further sharp increases in global energy, other commodity and tradable goods prices”. Its latest predictions showed the economy to be 2 per cent smaller by the middle of the decade compared with its February forecasts, just before Russia invaded Ukraine.

Economic weakness and a few more interest rate rises would not be enough to bring inflation down, according to the three MPC members — Jonathan Haskel, Catherine Mann and Michael Saunders — who voted to raise interest rates by half a percentage point.

This minority on the committee thought that initial momentum in the economy would continue to add to inflationary pressures and a larger increase was needed to “lean strongly against risks that recent trends in pay growth, firms’ pricing strategies and inflation expectations in the economy more widely would become more firmly embedded”.

Vivek Paul, chief UK investment strategist at the BlackRock Investment Institute, said the BoE’s dilemma over how to bring down inflation without inflicting pain on the economy was “especially acute”.

“While inflation has continued to climb beyond the bank’s previous expectation of an April peak, this is squeezing household income and the UK’s growth forecast is now the weakest among G7 economies, according to the IMF,” said Paul. “Given the weakness of the economic outlook, we expect the bank will ultimately choose to live with some inflation.”