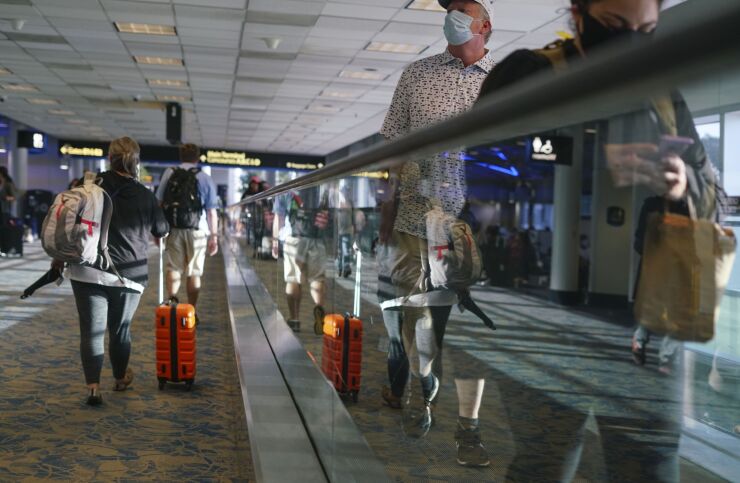 The North Carolina Local Government Commission approved more than $1.5 billion in financing for local government projects across the state, including about $900 million for infrastructure improvements at the Charlotte and Asheville airports.

At its meeting Tuesday, the commission approved the city of Charlotte’s request to issue up to $425 million in revenue bonds for the Charlotte Douglas International Airport.

Proceeds will finance improvements at the airport, which include a major terminal, and refund an outstanding bond issue. Several projects are under way or about to begin construction.

The airport plans to price $353.8 million of new money tax-exempt bonds May 11, of which a $72.1 million series would be subject to the alternative minimum tax.

BofA Securities is senior manager, according to an online investor presentation; JPMorgan, PNC Capital Markets and Ramirez & Co. are co-managers.

The city was also granted approval to sell $300 million of bond anticipation notes for capital improvement projects and to refinance an existing BAN.

The Local Government Commission is chaired by state Treasurer Dale Folwell and is staffed by the treasurer’s department.

The commission also approved the Greater Asheville Regional Airport Authority’s request to issue up to $185 million in revenue bonds. Proceeds will finance the expansion and modernization of the terminal, ticket lobby, Transportation Security Administration screening, baggage claim and concessions area.

The authority also plans to make improvements to the existing terminal building and supporting infrastructure, build a centralized energy plant, and a new air traffic control tower. The bonds are expected to be offered for sale on May 19.

Raymond James & Associates will be lead underwriter, according to Local Government Commission documents.

Additionally, the commission approved almost $274 million in bond sales by Cabarrus County for other infrastructure projects.

The county’s Water and Sewer Authority also got approval to sell $85 million of revenue bonds for the third phase of its expansion of the Rocky River Regional Wastewater Treatment Facility.

$21.1 million in financing sought by Rockingham County to build a Workforce Development Center at Rockingham Community College was approved. The installment contract would be paid over time instead of in a lump sum.

Lexington in Davidson County received approval of an installment contract for up to $14 million to build a one-stop administrative building in the former Windstream building to consolidate all current customer service functions and utility payments now housed at multiple locations.

At its previous meeting on April 26, the commission took steps to help counties and municipalities struggling to fix failing water and sewer infrastructure.

It voted to commit the towns of Eureka in Wayne County, Kingstown in Cleveland County, Robersonville in Martin County and Spring Lake in Cumberland County, and the Cliffside Sanitary District in Rutherford County, to completing statutory requirements for units designated as distressed under Viable Utility Reserve legislation. Previously, the commission adopted a similar resolution for Pikeville in Wayne County.

All of these entities are under the commission’s financial control.

However, he said not all areas are sharing today in this prosperity.

“It also is a state where some geographic regions face the stress of depopulation, loss of businesses and declining tax bases that make it difficult for local governments to upgrade or replace deteriorating infrastructure and still provide other basic services,” he said. “Failing water and sewer systems pose financial, environmental and public health risks to a community.”

Under the resolutions, the municipalities agreed to conduct an asset assessment and rate study and participate in a training and educational program. They also are required to develop short- and long-term action plans for infrastructure repair, maintenance and management; continuing education of the governing board and system operating staff; and long-term financial management. As distressed units, they may apply for Viable Utility Reserve funding to help pay for construction needs identified in their short- and long-term action plans.

The action falls under a law that went into effect in 2020. The legislation created a Viable Utility Reserve fund to improve and sustain water and wastewater systems, and required the LGC and State Water Infrastructure Authority to develop criteria to identify distressed units.

“People have a right to clean, accessible and affordable water and sewer services. We are doing our best to assist these local governments, and this latest action by the LGC to identify local governments with distressed water and wastewater systems under the VUR legislation is one more example of that. But the list is long and getting longer,” Folwell said.

On Thursday, the state will be selling $300 million of Series 2022A limited obligation Build NC bonds.

Wells Fargo Securities will price the tax-exempt deal, which is rated Aa1 by Moody’s Investors Service and AA-plus by S&P Global Ratings and Fitch Ratings. All three rating agencies have a stable outlook on the credit.

BofA Securities, Barclays Capital, Citigroup, JPMorgan and Loop Capital Markets will be co-managers. The financial advisor is Masterson Advisors, while the bond counsel is Robinson Bradshaw.

The bonds are limited obligations of the state, which is rated triple-A by Moody’s, S&P and Fitch, and are payable from funds from the state Highway Trust Fund, subject to appropriation by the legislature.

Proceeds will finance transportation projects across the state and fund the debt service reserve fund.

The bonds are being issued under the state Capital Facilities Finance Act, which states the total amount of Build NC bonds can’t exceed $3 billion by Dec. 31, 2028, and is limited to an issuance of $300 million in each fiscal year.

Bond can only be issued for transportation projects approved under the State Transportation Improvement Program.