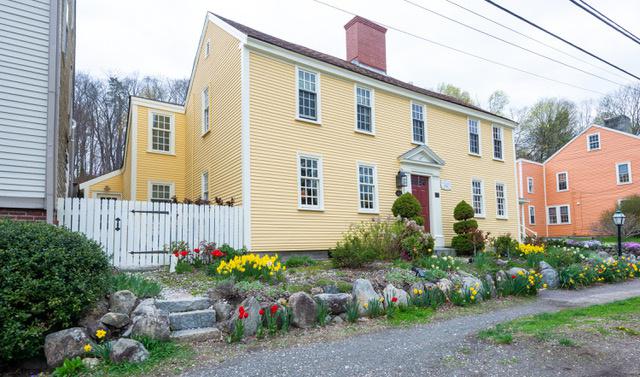 First Period houses are the timber-framed dwellings built by the 17th century settlers of the New World who relied on a medieval building style already out of fashion in the Old World. They were the building style of New England from the period following the initial settlement of the English in Massachusetts in 1620 to the emergence of Georgian-style architecture around 1700. Increasingly rare and endangered by age, decay, development, alterations and ignorance, they are found in a few coastal northeastern communities. Ipswich, Massachusetts, a small town about 30 miles northeast of Boston, has 60 known First Period houses, this country’s largest concentration of our earliest architecture.

“We bought it because we were afraid that the house would end up torn down or badly damaged,” they say.

“It was abandoned. The house had no wiring or plumbing and was leaning forward because the summer beam had been removed. It was horrifying.”

Summer beams, large horizontal beams in the ceilings of early American timber-framed houses, supported the floor above while acting as binding beams running in a transverse direction, connecting one post to another. Sometimes as wide as 18 inches, summer beams fell into disuse after about 1750, when heavier floor joists were used.

With significant help from preservationist architect Matt Cummings of Ipswich, the owners rebuilt the house, including restoring the summer beam. The project took 1 ½ years and included adding modern conveniences, an updated roof, windows and all mechanical systems.

Today, the 3,130 square foot antique house has four bedrooms, three bathrooms, four fireplaces in 11 rooms on a .38 acre lot. While honoring its history, the house’s owners have installed modern amenities including a large, sunny kitchen with a 15-foot island and extensive storage. The primary bedroom features a custom walk-in closet and ensuite bathroom. Most recent renovations include a spacious first floor laundry room, a barn converted to a gorgeous library and a garage converted into a comfy home office.

While the modern conveniences make the Daniel Lummus House livable, it’s the original, historic elements that visitors respond to.

“They fall in love with the walk-in cooking fireplace,” the homeowners say.