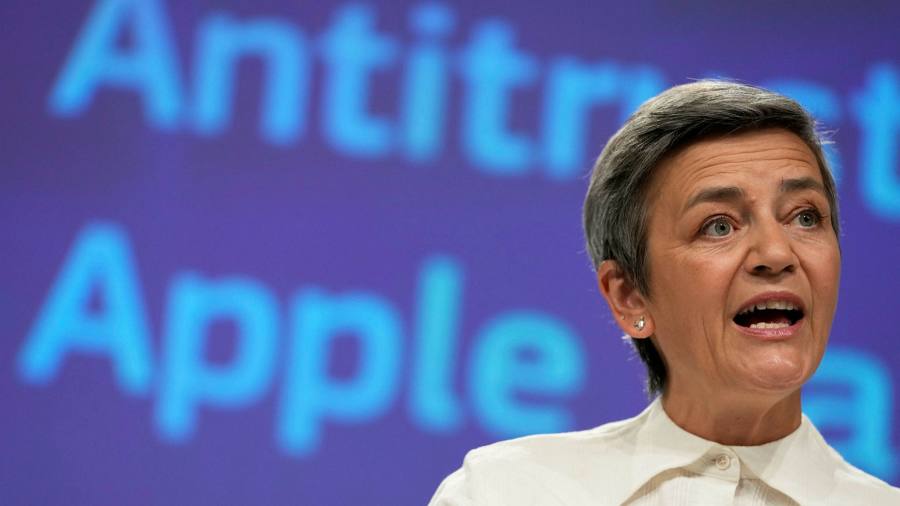 Antitrust investigators are concerned that the US tech group is preventing competitors from accessing “tap and go” chips or near-field communication (NFC) to benefit its own Apple Pay system, the European Commission said in a statement on Monday.

She added that the commission had “preliminarily found that Apple may have restricted competition, to the benefit of its own solution Apple Pay”.

If confirmed, “such a conduct would be illegal under our competition rules”, Vestager said. The company could face fines worth up to 10 per cent of global turnover if the charges are upheld.

The EU charge is the latest in a number of antitrust investigations opened against the tech giant in Brussels. Apple is also facing scrutiny over the way it may be disadvantaging rivals on the App Store by taking 30 per cent of some subscription fees while denying some services the option of telling users there are other ways of upgrading. This case was opened after music streaming service Spotify complained to the commission more than two years ago.

The fresh charges come after Brussels approved two landmark pieces of legislation, including the Digital Markets Act, aimed at curbing the power of big tech groups.

In its preliminary findings in the latest case, Brussels said it considered that Apple “enjoys significant market power in the market for smart mobile devices and a dominant position on mobile wallet markets”.

The findings of the investigation added: “Apple Pay is the only mobile wallet solution that may access the necessary NFC input on iOS. Apple does not make it available to third-party app developers of mobile wallets. The NFC ‘tap and go’ technology is embedded on Apple mobile devices for payments in stores.”

Apple said: “We designed Apple Pay to provide an easy and secure way for users to digitally present their existing payment cards and for banks and other financial institutions to offer contactless payments for their customers. Apple Pay is only one of many options available to European consumers for making payments, and has ensured equal access to NFC while setting industry-leading standards for privacy and security.

“We will continue to engage with the commission to ensure European consumers have access to the payment option of their choice in a safe and secure environment.”

Vestager said: “Mobile payments play a rapidly growing role in our digital economy. It is important for the integration of European payments markets that consumers benefit from a competitive and innovative payments landscape.”