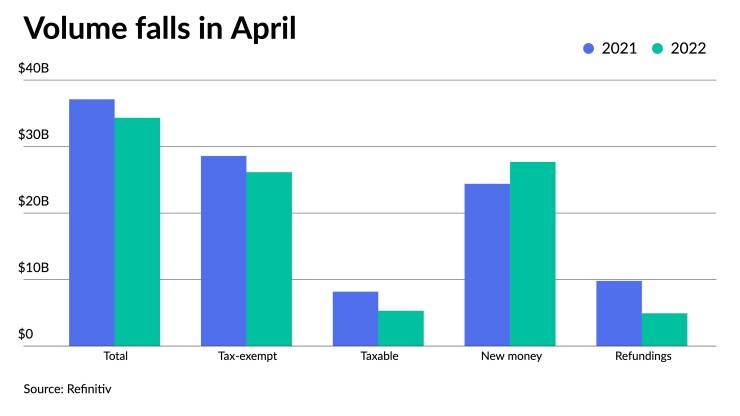 Municipal issuance dropped 7.5% year-over-year in April, again owing to a drop in taxable and refunding volumes in the face of continued market volatility and rising interest rates. The $34 billion figure is slightly up from the 10-year average of $33.612 billion.

With taxes due in April, issuance is usually down compared to March, participants note. This year, total issuance was down 12.8% from March but outside of the holiday-shortened week in mid-April the primary still saw a decent number of deals, said Eve Lando, a portfolio manager for Thornburg Investment Management.

And while taxable and tax-exempt issuance is down year-over-year, she believes issuance will come back to the tax-exempt market, and taxables could potentially gain steam and become more attractive.

“I don’t see any issue with the decline in supply,” she said. “If anything, it’s just the month-to-month discrepancy and municipal issuers will come to market: One, because they have necessity to do that as there is a time penalty aspect to it, and two, on a relative basis, [munis are] rather inexpensive.”

“Muni issuers don’t have that much leeway in issuance, meaning they can’t just postpone the project indefinitely all in the hope that the market will turn,” she said.

But while there have been some issuers who have chosen to go ahead, whether it be in new-money or refundings, Tom Kozlik, head of strategy and credit at HilltopSecurities, said others may have taken a wait-and-see approach from the sidelines to see if the Fed will provide any relief from the rate shock.

The Fed hiked interest rates 25 basis points at the Federal Open Market Committee meeting on March 16, the first of several rate hikes this year. At the next FOMC meeting on May 3-4 participants expect the Fed to implement anywhere from a 25- to 75-basis point hike, with general consensus of a 50 basis point increase.

The good news, though, Kozlik said is the Fed is trying to be as transparent as it can, which is dissimilar from previous decades, thus allowing the market to price in potential rate hikes.

Beginning with May, BofA Global Research analysts Yingchen Li and Ian Rogow note the muni market will enter a four-month period of large redemptions. From May through August, they estimate total principal and coupon redemptions will be to $229 billion and issuance is at $190 billion. For May, they predict principal and coupon redemptions will total $40 billion, while issuance will be $43 billion.

However, they said, “this picture likely does not fully characterize the strength of potential demand versus supply because only about 7.5% of the redemptions are taxable bonds, while in the new-issuance market, 17% of new issuance year-to-date are taxable and the percentages have been higher than 20% in recent weeks.”

But even if supply picks up, it is highly unlikely that issuance will surpass last year’s totals given the slow start to the year.

Kozlik has revised his forecast for the year, predicting total issuance will fall somewhere between $400 billion to $450 billion. For total issuance to top $450 billion, he said every month from May onward would have to be above average, and he doesn’t see that happening.

And while the last week of April saw issuance top $13 billion, the new-calendar issue for the first week of May is significantly down at an expected $4.6 billion

“I’m not expecting there to be a lot of weeks like that,” he said of the week of April 25.

There have been more market-moving events and changes during the first four months of the year than in the entirety of 2021, Lando noted.

“2021 was just a spectacular year for issuers. The market was overflowing with cash, with billions upon billions of inflows coming to the muni market,” she said.

But in 2022, the year started with outflows. The trend has only continued — though the amount of outflows from mutual funds has slowed in the past two weeks — which is a consideration for underwriters when coming to market, she said.

In the states, California claimed the top spot.