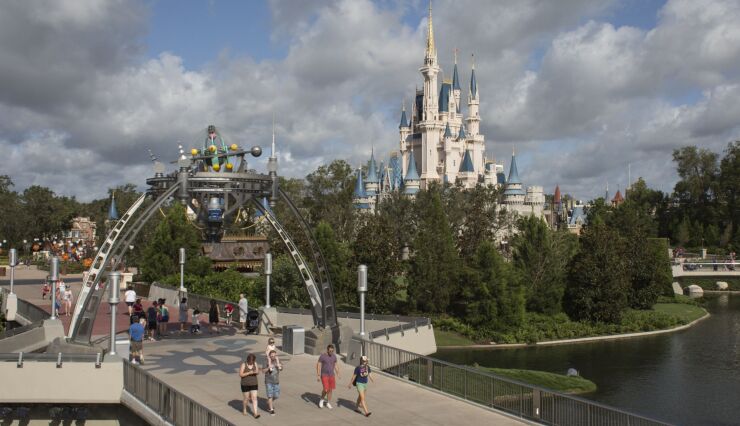 S&P Global Ratings revised the outlook on the Reedy Creek Improvement District to developing from stable due to the uncertainty as to what will happen next in the economic/political saga playing out in Florida.

“The outlook revision to developing reflects our view that there is at least a one-in-three chance that the credit profile securing the tax-secured bonds could be positively, or negatively impacted, but future events remain unclear,” S&P credit analyst Christian Richards said in a statement Friday.

“In particular, it remains to be seen if and how a transfer of the district’s assets, liabilities (including bonds outstanding), and operational responsibilities to other units of local government, following the passage of legislation dissolving RCID, will play out,” Richards said.

RCID was created in 1967 to help Disney develop the property into a theme park. It is a special tax and governing taxing district for the land owned by Disney World in Orlando. It has the same authority as a county government and includes 39 square miles of land in Orange and Osceola counties.

Under the Reedy Creek Improvement Act, the state pledged it wouldn’t impair the rights or remedies of bondholders or limit or alter the rights of RCID to levy and collect revenue and taxes to fulfill the terms of any agreement made with bondholders, according to S&P.

“Should there be any legislative, legal, or other actions affecting this pledge we will continue to review and incorporate them into our analysis as they occur,” S&P said.

RCID is mostly funded by property taxes, with Disney accounting for 88% of its property tax base. At the close of fiscal, 2021, the district had about $719 million in tax-secured debt and $185 million in utility debt outstanding.

“The legislature’s analysis suggests that if the district does not reconstitute under the Florida’s Uniform Special District Accountability Act, the assets, liabilities, and operations would be transferred to the underlying local governments, namely Orange and Osceola counties,” S&P said.

The new law doesn’t say how an asset and liability transfer would be done, so the financial implications for the counties are not predictable, S&P said.

“As the counties do not yet have a plan in place for receiving RCID’s assets and liabilities and ensuring timely debt service payment, the credit impacts remain uncertain,” S&P said. “However, given the breadth of the economies, finances and management structures relative to RCID, we believe there is a possibility that the credit quality securing RCID’s bonds improves following a transfer.”

“In the wake of the state of Florida’s (Aaa stable) recent decision to dissolve the district by June 2023, the rating also considers the state’s non-impairment pledge to bondholders of the district as outlined in the district’s enabling act,” Moody’s said.

“Depending on the ultimate dissolution plan, the credit quality of RCID’s debt could improve, remain the same, or weaken,” Moody’s said.

Fitch said on Thursday it expects the title of all property owned by RCID, including its indebtedness, to be transferred to Orange County, rated AAA with a stable outlook, Osceola County, rated AA with a positive outlook, and the cities of Bay Lake and Lake Buena Vista, or to a possible successor agency.

Fitch said it believes implementation will be complicated, increasing the likelihood of negative rating actions for RCID’s outstanding bonds.

“Furthermore, the dissolution potentially impinges creditors’ rights and may violate the state’s covenant to bondholders under the RCID Enabling Act in that it will not limit or alter the right of the district to carry out various governmental services or to levy and collect taxes, fees and other charges,” Fitch said.

The full implications of a transfer of assets and liabilities for the receiving governments and taxpayers remains unknown at this time, Fitch said.

“This week, the governor’s office admitted that there is no plan to actually implement on a practical basis the dissolution of the Reedy Creek Improvement District,” Krist wrote in his weekly report. “There needs to be a resolution of the emerging conflict between the goals of the governor and the Legislature and state law.”

Disney, he said, has pointed out, “pursuant to the requirements and limitations of Florida’s Uniform Special District Accountability Act, which provides, among other things, that unless otherwise provided by law, the dissolution of a special district government shall transfer title to all of its property to the local general purpose government, which shall also assume all indebtedness of the preexisting special district.”

This would mostly affect Orange and Osceola Counties, he said.

“Without additional implementing legislation, the details of any transfer are unknown,” he wrote.

The dissolution of RCID raises some important questions for the municipal bond market, Natalie Cohen, founder of The Public Purse, wrote in a special report released Friday

“In this hyper-partisan environment, there is increased danger that state governor/legislative actions could impair bondholder rights,” she said.

“Presumably, if Orange County (and Osceola, too) absorb the outstanding debt (about $1 billion), they also absorb the sizable taxable assets — but would their current tax rates and tax structure be sufficient to cover the assumed debt?” she asked. “And would Orange County now be charged with re-doing its governing structure to include Disney World’s police, fire, sanitation, water management services, pay and pension policies?”

At the moment, she noted, there is a great deal of uncertainty among RCID’s employees about their future as well as among bondholders and other stakeholders.