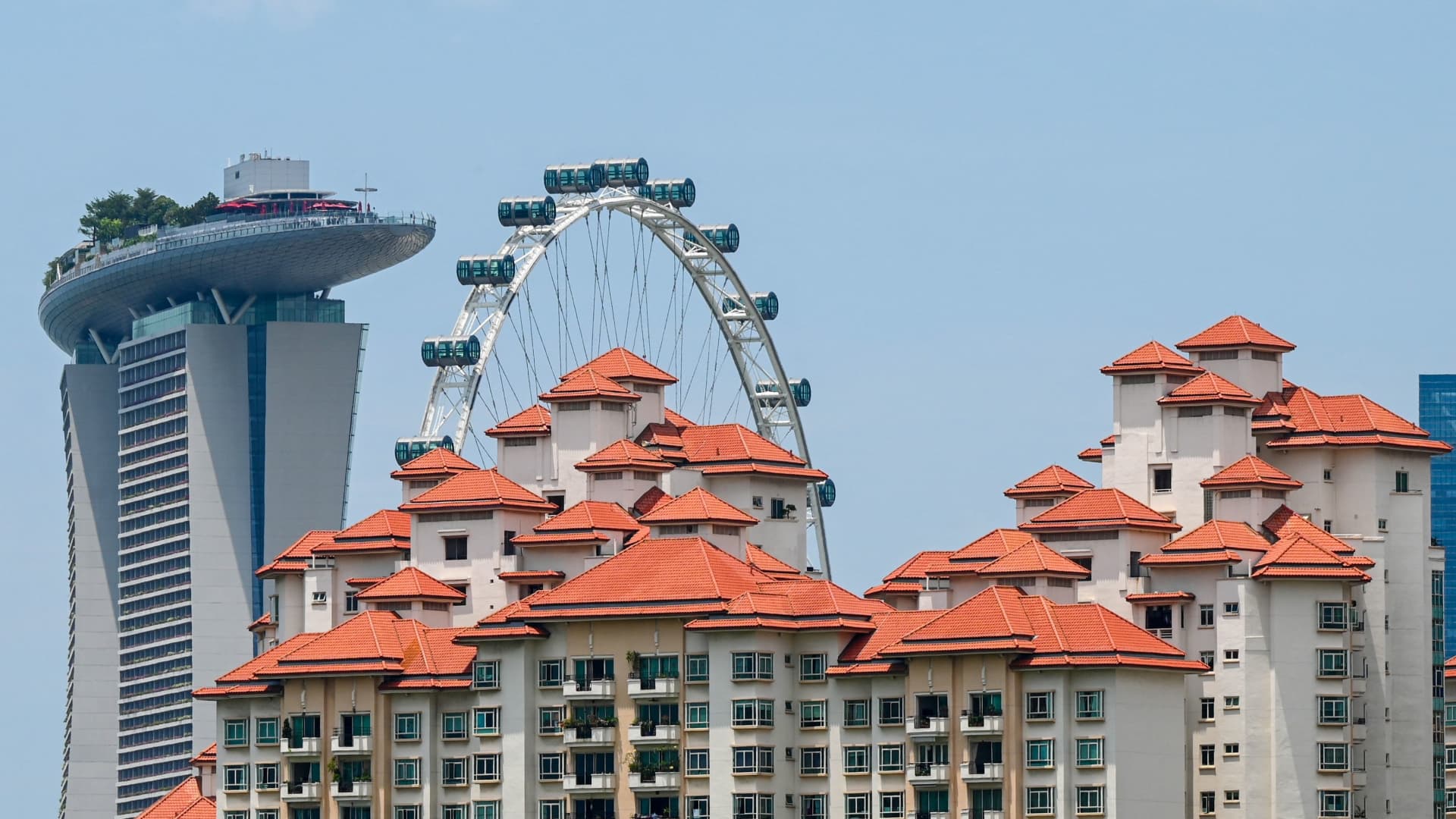 SINGAPORE — After eight years in Hong Kong, Jonathan Benarr is giving up that city for a new set of attractions — in Singapore.

“Hong Kong was always the fun place to be,” he told CNBC. “Singapore was where you went if you were a bit boring or you had a family.”

“Well, fast forward [two years], Singapore is a shining light,” he said. “You’ve just reopened the bars and the clubs, and people are being treated like adults.”

Stifled by strict Covid restrictions in Hong Kong, some residents from the Chinese financial hub have moved to Singapore, and there are signs that rental demand has gone up.

Private home rents climbed 4.2% in the first quarter of this year, compared to a rise of 2.6% in the previous quarter, according to the Urban Redevelopment Authority.

“Anecdotally, we know that perhaps there are some of those based in Hong Kong looking to relocate to Singapore, and this is contributing to the increase in rents,” said Leonard Tay, head of research at real estate agency Knight Frank Singapore.

To be clear, interest from Hong Kong is not the only reason for rising rents. Rental prices in Singapore were already moving higher during the pandemic due to demand from various sources, including young adults moving out of their parents’ homes and people looking for interim housing because of construction delays.

In Hong Kong, people arriving need to quarantine for at least seven days in a hotel and take multiple Covid tests. Singapore, however, has gradually dropped quarantine requirements since September. From Tuesday, vaccinated visitors will no longer need to take any Covid tests.

“What was once a progressive city, just feels like it’s no longer interested in being part of the international conversation,” he said.

The Briton is currently packing up his apartment in Hong Kong and moving to Singapore permanently.

In response to CNBC’s request for comment, Hong Kong’s Information Services Department pointed to a speech by Chief Executive Carrie Lam in late March, where she said Hong Kong needs to balance between virus risks and Covid measures.

This is to “enable the city to continue addressing the social and development needs of Hong Kong and the individual circumstances of our people,” she said.

“We couldn’t be too harsh with our people and the people’s tolerance has always been one of the factors that we need to consider in devising the best public health measure for Hong Kong.”

Surge in arrivals from Hong Kong

Visitor arrivals from Hong Kong to Singapore nearly doubled from January to February this year, according to Singapore’s tourism board.

Some of those arrivals intend to settle down in Singapore and have turned to co-living spaces or serviced apartments, according to industry players.

Singapore-based co-living start-up Hmlet said there was an “exponential” increase in bookings in January 2022, “which we attribute to demand from Hong Kongers anticipating the imminent tightening of public health protocols.”

Hong Kong has a dynamic zero strategy for Covid and imposed strict measures from January in a bid to slow the spread of the virus, which included a ban on dining in from 6 p.m. daily.

The city tightened restrictions further in February, though they were eased slightly last Thursday.

Serviced apartments managed by Far East Hospitality also saw a spike in inquiries and bookings around the end of February, though that has since slowed, the company told CNBC.

Some arrivals from Hong Kong are making bookings for as short as two weeks, while others are intending to stay for 12 months, according to data from Hmlet and Far East Hospitality.

“Based on our observation, most bookings from Hong Kong are for permanent relocation to Singapore,” Hmlet’s CEO said.

“Interestingly, we also noted a group of members whose original travel intent was for business but eventually converted to permanent stays,” Makarachvili added.

Around 70% of bookings from Hong Kong at Hmlet Homes were for three-month stays, the minimum required. The remaining 30% of bookings were for longer-term stays of between six and 12 months.

Some 80% of Hmlet Homes’ customers from Hong Kong are families with young children, the CEO added.

This indicates that while guests may relocate for work, they are looking to bring their families along as well.
Tan Chia Hui
head of operations for hotels and serviced residences, Far East Hospitality

Far East Hospitality has received a mix of bookings — from both travelers and businesses looking for interim accommodation for their employees, according to Tan Chia Hui, head of operations for hotels and serviced residences.

The corporate bookings are typically for a period of one to three months, and for bigger units with between two and four bedrooms, she added.

“This indicates that while guests may relocate for work, they are looking to bring their families along as well,” she said.

Co-working firm WeWork said its Singapore locations saw a nearly 13% jump in sales and inquiries from Hong Kong-based companies in the fourth quarter of 2021 compared to the third quarter.

JustCo said it hasn’t observed a substantial increase, but that international financial institutions in Hong Kong are seeking flexible workspaces in Singapore.

Singaporeans based in Hong Kong have made extended trips back home in recent months, citing the relative freedom that people in the Southeast Asian city now enjoy compared with Hong Kong.

“The main thing was the restrictions,” said a Singaporean who works in the banking industry, who requested anonymity as he did not have permission to speak to the media.

He remained in Singapore for about a month, where he said there was “some degree of normalcy.”

“There’s not much evolution in how [Hong Kong] is handling it, and therefore it doesn’t really give us much hope … that there will be any form of reform or change in the government’s strategy,” he said.

Another Singaporean, who wanted to be known only as Leung, said he bought a one-way ticket to Singapore when Hong Kong announced in February that it planned to test its entire population for Covid three times.

He said that at that point, he felt “the government [had] totally lost it, I have to get out of here.”

In the past, maybe I could have entertained … staying long enough to be a Hong Kong PR, but for now, I think with the current situation, it’s unlikely that I will do so.
Singaporean who works in banking

Some Singaporeans were also motivated to return to visit their home country to see family and friends.

One Singaporean, who works in finance in Hong Kong and declined to be named, said it was a good opportunity to visit loved ones, especially when the Covid situation in the Chinese city worsened earlier this year.

She said her friends used Singapore as a base for short-term business or personal trips to the U.S. and Europe since Singapore doesn’t require fully vaccinated travelers to be quarantined.

Leung regularly crosses the border into Malaysia to visit family, which would not be possible if he were in Hong Kong.

Too little too late?

As of Thursday, Hong Kong began allowing groups of four to gather at any one time, and restaurant operating hours were extended to 10 p.m.

But that’s “not something to celebrate,” said Leung, who works in a financial institution and returned to Hong Kong in April.

In Singapore, limits on social gatherings have been scrapped and social distancing is no longer required. Authorities also recently lifted the 10.30 p.m. cut-off for alcohol sales, and allowed bars and karaoke lounges to reopen again.

It’s great that Hong Kong’s rules are going to be less extreme, but there’s still a long way to go, said Leung.

“If this continues on in Hong Kong for, I don’t know, the next year or so, I think it will be a strong enough reason to leave,” he said.

The Singaporean who works in banking and remained in Singapore for a month said he doesn’t plan to leave Hong Kong immediately, but Covid and political upheaval in the city have made him think about his long-term plans to stay.

“In the past, maybe I could have entertained … staying long enough to be a Hong Kong [permanent resident], but for now, I think with the current situation, it’s unlikely that I will do so,” he said.

Similarly, Leung said he is not in a rush to move back to Singapore, but is open to the idea.

“If something comes along, the numbers are right, it aligns with my career goals, why not right? It’s a good time to move,” he said.

Florida County Map Shows Where The Income Gap Is Biggest
Shiba Inu price rebounds 100% after record lows against Dogecoin — More upside ahead?
Rumor has it that Dogecoin could shift to proof-of-stake — What does that mean for miners?
Uzbekistan Collects Over $300,000 From Crypto Sector
Where the Bulls Roam: TSLA, ILMN, SQ, NVTA, TTD