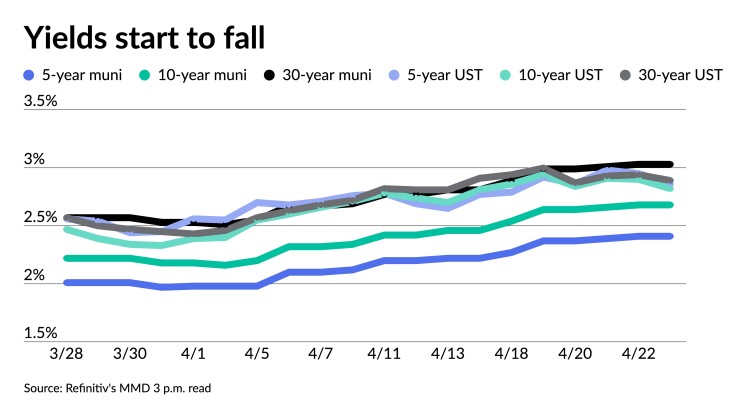 Municipals were steady to firmer in spots Monday but underperformed U.S. Treasuries that saw yields fall further while equities ended in the black led by tech stocks.

Triple-A yield curves saw one to two basis point bumps while UST ended the session four to nine better after falling double-digits earlier in the day.

Yields and volatility continue to surge, which Vikram Rai, head of Citigroup Global Markets’ municipal strategy group, said points to uncertainty, with the Federal Reserve as the largest unknown.

“Either the market is convinced the Fed is behind the curve with respect to fighting inflation, or it is simply responding to the sustained stream of hawkish statements that keep coming from the Fed,” he said in a Monday call.

The Fed is expected to raise short-term rates by 50 basis points at the May meeting to continue battling inflation, but many investors believe this is not aggressive enough, according to a Monday market comment from Nuveen.

“The municipal market selloff is essentially due to rising rates, as tax-exempt credit remains strong,” Nuveen said, adding that institutional managers continue to use the selloff to retool portfolios.

After 10 consecutive weeks of outflows, Rai, like many participants, said fund flows will turn positive once rates stabilize.

“For now, the constant barrage of hawkish speak from the Fed has engendered a very unstable market environment,” he said. “And that’s why rates are moving up and down.”

In past rate hike cycles, he said rates stabilized after the first rate hike, but it hasn’t been the case this time around.

“It seems that the March meeting never ended because we keep getting communique from the Fed, and that’s rocking the market,” Rai said.

Rai expects the earliest rates could stabilize would be in May following the expected 50 basis point rate hike during the next FOMC meeting.

The cheapness of the market has yet to entice buyers back in a meaningful way — there are simply more sellers than buyers.

CreditSights strategists Pat Luby and John Ceffalio noted that municipal yields have been swinging between attractive and overly rich since March, which is leading to opportunities for crossover and taxable buyers.

Single- and double-A-rated muni yields were greater than the after-tax yields of intermediate to long corporates and taxable munis as of Friday’s close, they said.

The reduction in prospective reinvestment demand has also harmed prices, since overall redemptions in April will be the lowest since April 2018, according to Luby and Ceffalio.

As a result, CreditSights strategists said tax-exempt yields have risen to levels that should appeal to taxable investors subject to the 21% federal corporate income tax.

However, they said, a seasonal lull in redemptions and reinvestment demand is expected to shift course and begin to strengthen the market.

Investors will receive their May 1 principal and interest payments from issuers next week, totaling $21.1 billion. They will receive an additional $18.4 billion for the remainder of the month, but the busiest season of the year will begin on June 1, they said.

Redemptions are expected to total $26 billion on June 1. Combined with the $11 billion of interest payments on that day, Luby and Ceffalio said, investors will have $37 billion to reinvest or spend.

The rest of the month will see an additional $24 billion paid out, and for the three-month summer redemption season issuers will be returning $118 billion of principal and $42 billion of interest, totaling $160 billion, according to CreditSights.

“We expect that the reinvestment demand resulting from the influx of cash into investor accounts will provide support for the market,” they said.

With dealers reluctant to take on inventory, investors who can step in to offer liquidity to the market — not just in the secondary but also in the primary — have an opportunity to be rewarded.

They said this week’s new -issue calendar features numerous deals that are likely to attract considerable interest from crossover buyers, such as insurance companies and banks.

“Municipal bond prices and yields are dependent on retail investor sentiment and mutual fund flows, the U.S. Treasury market, the Fed and the economic conditions,” they said. “We do not expect the increase in reinvestment demand to fully offset the negative forces, but we do believe that the need for investors to put at least a portion of the maturing and called bond proceeds back into the municipal market will stabilize demand and help the market to perform better than it has over the last several months.”