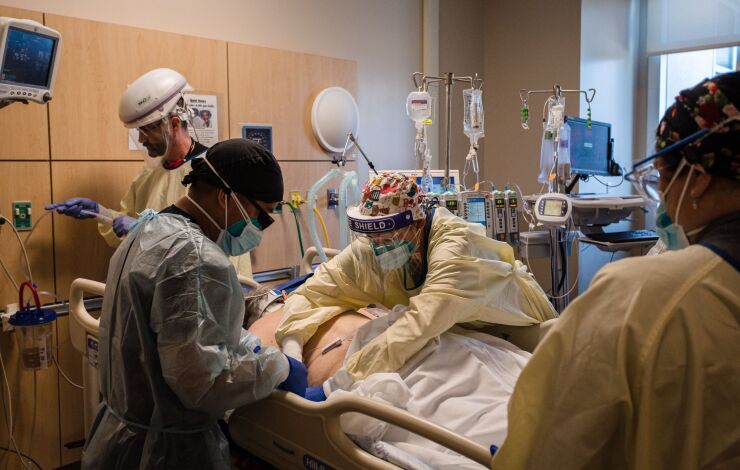 For its downgrade to A-plus from AA-minus Wednesday, Fitch analysts said the action “predominately reflects Providence’s operational trajectory, and to a lesser extent, the separation of Hoag Memorial Hospital Presbyterian from the Obligated Group.”

Fitch’s downgrade affects $6 billion of rated debt. It revised its outlook to stable from negative at the lower rating.

S&P lowered its long-term rating to A-plus from AA-minus on Monday, but retained the negative outlook it originally assigned in January.

Moody’s Investors Service downgraded the healthcare system April 5 to A1 from Aa3.

Providence was formed when Providence Health & Services and St. Joseph Health System merged on July 1, 2016. It is headquartered in Renton, Washington, and operates in Alaska, Washington, Oregon, Montana, California, New Mexico and Texas.

Providence and Hoag Hospital in Orange, County announced in mid-January they would officially separate on Jan. 31 with Hoag becoming independent from Providence and Covenant Health network, the structure that governed the affiliation.

“The rating action reflects a weaker financial profile following the disaffiliation of Hoag at the same time that margins remain pressured as a result of COVID-related challenges,” said S&P Global Ratings credit analyst Suzie Desai in a release.

The negative outlook “reflects our view of [Providence’s] steep losses in 2021, particularly compared with the experience of similarly sized and rated peers, coupled with certain service area characteristics that we believe could create challenges for earnings to rebound to a level consistent with the rating,” Desai wrote. “In addition, [Providence’s] pro forma balance sheet has less financial flexibility to absorb persistently sizeable losses, even at the lower rating.”

Fitch and S&P had assigned a negative outlook shortly after Providence announced in January the disaffiliation from Hoag.

Providence’s operational struggles were in evidence in fiscal year of 2020 and worsened in fiscal 2021, Fitch said citing audited results through Dec. 31.

“The Hoag separation, which was effective Jan. 19, 2022, also negatively affected Providence’s overall credit profile, as it represented 7% of Providence’s operating revenues and 17% of the system’s unrestricted cash and investments,” Fitch analysts wrote.