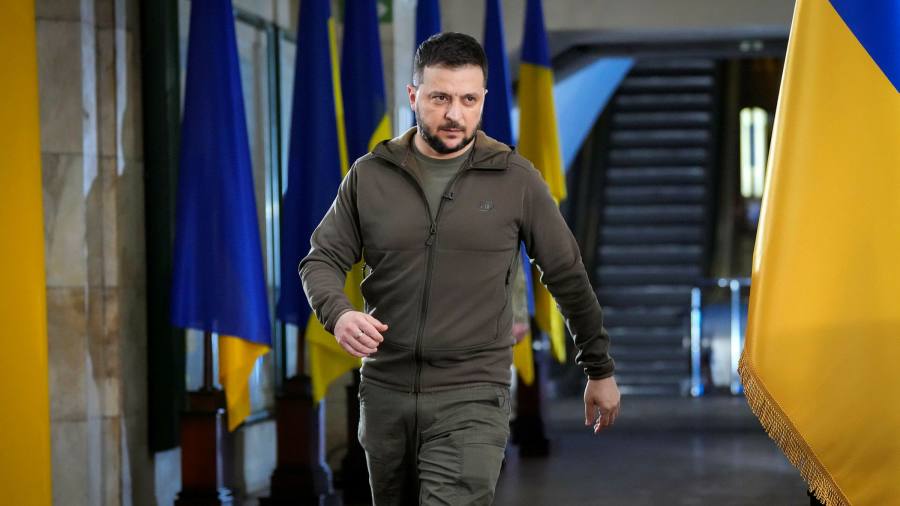 Ukrainian president Volodymyr Zelensky lashed out at the Kremlin after Russian missiles killed eight civilians in the port city of Odesa, as America’s top diplomat prepared to visit Ukraine for the first time since Moscow’s full-scale invasion began eight weeks ago.

In heated remarks, Zelensky called the Russians “bloody bastards”, “Nazis” and “Rashists” — a Ukrainian neologism mixing “Russians” and “fascists” — while pressing allies to increase deliveries of weaponry and ammunition in a bid to tip the war’s balance in Ukraine’s favour.

Russia has launched new offensives in the east and south of Ukraine that the country’s allies predict will bring some of the fiercest fighting yet. This week Moscow made clear that it wanted to occupy not only Ukraine’s eastern Donbas region, but all of its south too, extending Russian control along the Black Sea coast to the Moldovan border.

The Ukrainian president said he still supported a diplomatic path to ending the war, but sounded angry at a press conference held deep underground at the capital’s Maidan metro station for security reasons.

“Eight people died and 18 to 20 were injured,” Zelensky said, speaking about Saturday’s missile attack. One of the missiles hit a multi-story residential building. “A three-month old child died . . . The war began when this child was a month old . . . Try to grasp that. Bloody bastards — I have no other words.”

Russia’s defence ministry claimed that its missile strike had targeted a logistics hub in Odesa that had housed foreign weapons. Russian and Ukrainian claims about the war could not be independently confirmed.

Zelensky spoke on the eve of what he said would be a visit by US defence secretary Lloyd Austin and secretary of state Antony Blinken to Kyiv. The Pentagon and state department declined to comment.

The US has vastly expanded the range of heavy weaponry it is delivering to Ukraine, and Zelensky said he intended to “have this conversation and talk about the armaments we need”.

“I want the war to stop,” Zelensky said, when asked about the prospects of reviving peace talks with Russia. “There is a diplomatic path and there is a military path [and] anyone in their sound mind would always opt for a diplomatic path.”

However, he said, Ukraine would “not continue negotiating” if people in Mariupol — where Ukraine’s last troops are holding out with civilians in a network of tunnels under the Azovstal steel plant — were killed, or if Russian authorities in the occupied southern region of Kherson were to stage a separatist referendum.

“They are Nazis,” Zelensky said. “Rashisty [Rashists]. The word is new, but the actions are the same as they were 80 years ago in Europe.”

Zelensky also said that about half a million people, including at least 5,000 children, had been deported from various Russian-occupied parts of Ukraine to the territory of Russia and two Russian-controlled separatist states in eastern Ukraine. The International Criminal Court in February opened an investigation into alleged war crimes and crimes against humanity committed since the beginning of the war.

The remarks reflected both Ukraine’s growing frustration with Russia’s intensifying assault and its need to communicate with Moscow on humanitarian issues, including evacuations of civilians from besieged areas.

Zelensky said that Ukraine was ready to offer a “humanitarian solution” to exchange civilians from Mariupol for wounded Russians. “We are also ready for the exchange of our troops defending Mariupol and we have offered it,” he said.

The Azov Batallion, the rightwing nationalist paramilitary group whose fighters have been among troops defending Mariupol, on Saturday released a video apparently shot in underground shelters there. It showed uniformed men greeting small children and civilians who said people had been living underground for a month and a half and were running short of food and water.