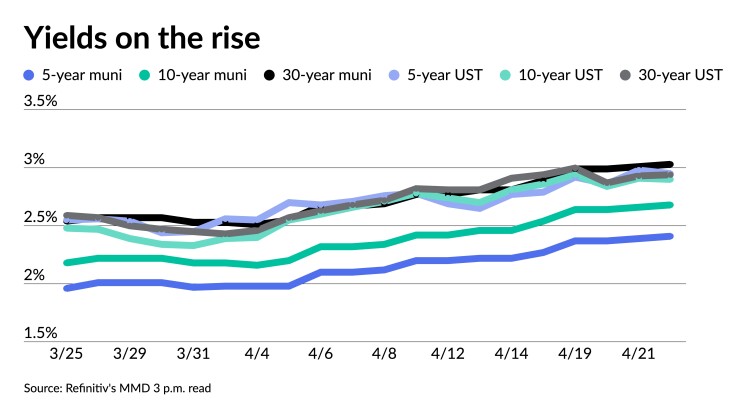 Municipals were steady to weaker in spots Friday ahead of a large new-issue calendar, while U.S. Treasuries were mixed and equities sold off upward of 2.5%.

Investors will be greeted Monday with a big uptick in supply, with the new-issue calendar reaching $9.251 billion with $6.572 billion of negotiated deals and $2.679 billion of competitive loans. Thirty-day visible supply grows to $17.45 billion, per Bond Buyer data.

The primary calendar is led by $3 billion of medical center pooled revenue bonds from the Regents of the University of California. The Michigan Finance Authority will come with $1.2 billion of Beaumont-Spectrum Consolidation hospital revenue refunding bonds.

Bellwether Washington is expected to come with $1.35 billion in four deals to lead the competitive calendar, along with Clark County, Nevada, with $200 million.

Another week of rising UST with municipals following along has led to compelling ratios out long.

While the front end continued to sell off as investors sold bonds to obtain cash, Barclays strategists Mikhail Foux, Clare Pickering and Mayur Patel said intermediate- and long-term yields underperformed the most in absolute terms, with 10-year and 30-year MMD yields both rising about 20 basis points. Munis also underperformed on a relative basis, with ratios across the board cheapening four to five points week over week.

“As the front end comes under pressure and yields rise, they could become quite attractive, although investors should be prepared to hold these bonds until maturity or their call dates,” they said.

After-tax yields for short-dated bonds are at their highest in 10 years, while the 3s10s and 3s5s have flattened substantially, they said.

Barclays strategists said triple-A yields have risen quickly this year, owing in part to the high valuations at the start of the year. Year-to-date muni yield increases have been the worst on record, with 10-year Refinitiv MMD rates up more than 160 basis points.

Barclays noted that during previous periods of rising rates, 10-year MMD yields have rallied by a median of 27 basis points in the following four months.

“However, for munis to follow that trajectory this year, rates would need to stabilize, which would also stem fund outflows,” they said. “We hope that will happen in the not-so-distant future, but inflation pressures would need partially to subside.”

They said the current weakening in munis has resulted in some of the worst weekly fund outflows in history, with year-to-date outflows exceeding $25.8 billion, according to Refinitiv Lipper, making this one of the most active outflow periods in recent memory. However, outflows now accounting for only 4% of total assets under management are still below levels seen during the 2013 taper tantrum and other outflow periods, they said.

In April, BofA analysts are neutral, but from May to August, they are bullish. Despite the current weak supply/demand picture, they said munis do not need to wait until May if Treasury market rallies continue through the rest of April.

However, while tax-exempt munis are beginning to glimpse the light at the end of the tunnel, they said taxable munis would fare far better if the Treasury market were to turn bullish.

Taxable munis followed the Treasury’s strong rally in lockstep on Wednesday, with no spread widening.

“By now, spreads widened to 2018/2019 ranges while general credit conditions of muni issuers is stronger than in those years,” BofA strategists said. “Further spread widening should be very limited unless the economy deteriorates faster than expected.”

Visa’s crypto strategy targets stablecoin settlements
Rumor has it that Dogecoin could shift to proof-of-stake — What does that mean for miners?
Puerto Rico’s December revenues 28% ahead of projections
First Solar (FSLR) and Saia (SAIA) Are Aggressive Growth Stocks
My Stock Dropped Over -20% – What Should I Do?