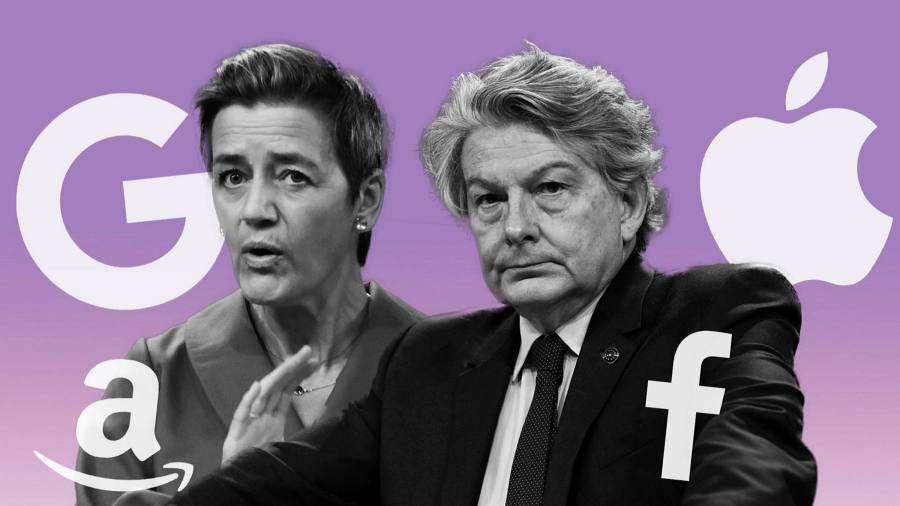 The EU will force Big Tech companies to police content online more aggressively after approving a major piece of legislation that sets the rules for the first time on how companies should keep users safe on the internet.

In the early hours of Saturday morning, after nearly 16 hours of negotiations, legislators in Brussels endorsed measures preventing companies such as Facebook and Google from targeting minors with online advertising, while manipulative techniques that force people to click on content will also be banned.

Leading tech groups will be forced to disclose to EU regulators how they are tackling disinformation and war propaganda in order to curb the spread of fake information — an effort that has gained fresh momentum since the Russian invasion of Ukraine.

The Digital Services Act, agreed in Brussels between member states, the European Commission and the European Parliament, is part of a wider push in Brussels to lead the way on how the internet should be regulated. Earlier this year the EU approved a separate piece of legislation, the Digital Markets Act, which aims to tackle the market power of Silicon Valley firms.

The suite of legislative measures, against which the world’s biggest technology companies lobbied bitterly, represents the most significant overhaul of the laws governing their operation in more than two decades.

Countries such as the US, Canada and Singapore are expected to follow with similar rules in the coming months.

It comes after years of frustration over antitrust enforcement being too slow or inefficient. Senior EU officials hailed it as a turning point in regulating Big Tech.

Thierry Breton, commissioner for the internal market, said: “The time of big online platforms behaving like they are ‘too big to care’ is coming to an end.”

The DSA aims to make the internet safer for consumers. Internet companies will have to offer terms and conditions that are understandable even to children. Targeting users online based on their religion, gender or sexual preferences will be among the practices to be banned.

Internet platforms such as Twitter will have to be transparent in the way they recommend content to their users. They will also have to be properly staffed to deal with content moderation because users will have the right to complain in their own language.

Those who breach the rules face heavy fines and bans from operating within the EU’s 27 countries.

The new legislation sets clear obligations for platforms that are designed to be proportionate to size, impact and risk, Breton said.

The commission will be able to “impose effective and dissuasive sanctions of up to 6 per cent of global turnover or even a ban on operating in the EU single market in case of repeated serious breaches”, he added.

She said: “Platforms should be transparent about their content moderation decisions, prevent dangerous disinformation from going viral and avoid unsafe products being offered on market places. With today’s agreement we ensure that platforms are held accountable for the risks their services can pose to society and citizens.”