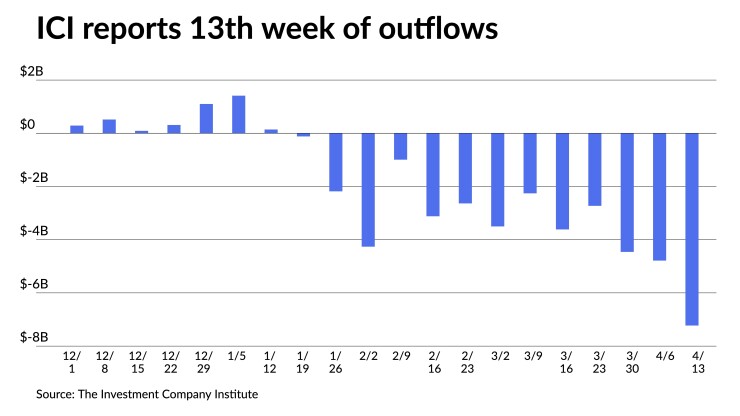 Municipals were relatively stable amid mixed trading Wednesday as U.S. Treasuries rallied out long and stocks were mixed.

The Investment Company Institute reported $7.2 billion of outflows from municipal bond mutual funds, the largest figure since the outlier months of March 2020.

In the week ending April 13, investors pulled $7.227 billion from the funds, up from $4.786 billion of outflows in the previous week. Exchange-traded funds saw inflows at $477 million versus $151 million of inflows the week prior.

Due to a large increase in inflation, benchmark triple-A tax-exempt yields have risen again across a steeper curve, while USTs steepened even more aggressively last week, said Matt Fabian, a partner at Municipal Market Analytics the firm’s weekly Outlook report.

While the Fed hikes rates to combat inflation, he said the news of Russia’s invasion continues to imply a longer-term impact on global growth/recession risk and rising COVID-19 cases weigh on investors’ minds.

Despite triple-A rates rising roughly 46 basis points on the 10-year since the beginning of April, per Refinitiv MMD data, and lower-rated yields rising a bit more, buyers have not fully engaged due to the associated uncertainty and volatility.

Fabian said the pullback of large funds as a marginal buyer in the primary market has led, in part, to the increase in yields. Last week, Refinitiv Lipper recorded $4.3 billion of outflows while ICI’s $7.2 billion of outflows reported on Wednesday are the highest of the year.

This is similar to the scale of 2020 outflows, however, the purge took only six weeks in 2020. The market disruption then was fierce and rapid — more than $24 billion pulled out in two weeks in that month alone — while this year it has been steady since the start of the year.

“In 2022, the longer time frame for outflows has given the funds the opportunity to marshal sufficient cash to avoid desperate selling,” he said. “And the new marginal buyer-holders have no interest in re-rallying bond prices and ratios to 2021 levels,.”

He said ahead of more Fed action, the fear-inducing losses with new purchases despite evident value across the curve.

While many on the buy-side expect the second quarter to bring an investor reengagement, just when that occurs is up for debate as macro effects continue to pound all markets.

Based on Bloomberg’s bids wanted figure — hitting $2.093 billion on Tuesday — and a widening de minimus impact across lower coupon positions, Fabian said pressure appears to be developing, with long 2s already swallowed and long 3s just beginning to be impacted as of last week.

If recent losses do not turn around before April 30, he said this will not be good for statement returns and could stimulate faster selling, Fabian said.

The recent underperformance of municipals to Treasuries continues to make the tax-exempt sector attractive, according to Joseph Kalish, chief global macro strategist at Ned Davis Research.

Amid the underperformance, the municipal/Treasury ratios have risen, according to the report from the Florida-based global independent investment research firm.

“That means munis may make sense regardless of your tax bracket, as the municipal curve remains steep compared to the Treasury curve,” he said. “The underperformance has been so striking that investors in the top tax bracket can earn higher after-tax yields than similarly rated corporate bonds across all maturities.”

Yields on municipal securities have risen sharply this year, across the term structure, across sectors, and by credit quality, according to Kalish.

“Munis have underperformed Treasuries this year, with long-term yields higher than comparable Treasuries on a pre-tax basis,” he said.

The underperformance has also trickled across the credit spectrum, as lower-rated credits have started to underperform, Kalish said in the report.

“Within investment grade, Baa has rolled over relative to double-A and single-A,” he said.

“Lower quality credits remain richly priced relative to higher-quality credits,” Kalish said. “With tax-equivalent yields so attractive, a normalization of quality spreads could offset the additional yield from lower-rated credit. It is not worth taking the additional credit risk at this time.”

Although investors have been lightening their exposure to municipals recently due to the rising yields and market volatility, the asset class remains an attractive option.

“Although yields may continue to rise, taxable investors looking for good relative opportunities should strongly consider munis,” Kalish said in the report.
The strong fiscal health among most state and local governments is helping support municipals, he said.

The reopening of the economy and higher prices have lifted sales and income tax receipts, Kalish said.

The default rate that excludes both Puerto Rico and Industrial Development Bonds is up by roughly a third in the last four years (to 0.30% this month from 0.22% in January 2018), “which is a source of some, but not undue, concern,” Fabian noted in MMA’s Default Trends.