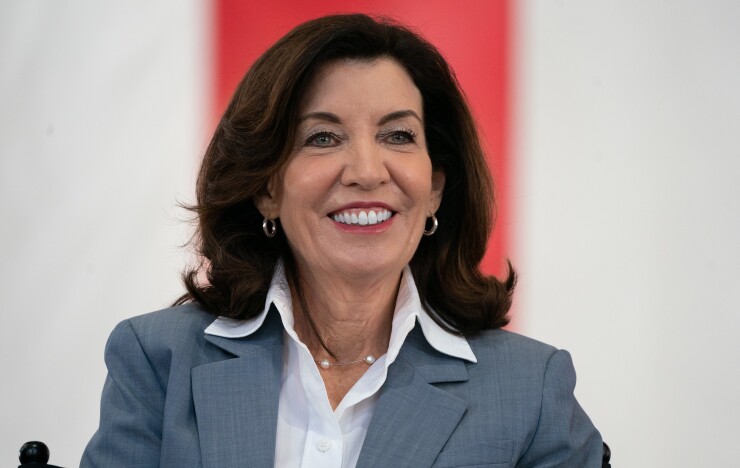 “Building reserves through 2025 is commendable since most pundits are seeing a higher probability of a recession over the next couple of years,” said John Hallacy, founder of John Hallacy Consulting LLC.

“Setting aside reserves equal to 15% of the state operating funds is important,” Howard Cure, director of municipal bond research at Evercore Wealth Management LLC, told The Bond Buyer. “However, since New York State has a progressive income tax system with volatile revenues derived from wealthy individuals, the equity market and a reliance on the financial services sector, this 15% may not be enough.”

The budget was approved a week late this year; the state’s fiscal year began on April 1

“There was not much difference in how the budget was negotiated this time versus previous budgets,” Cure said.

“There wasn’t much input from public hearings and there was the insertion of non-budgetary legislation such as bail reform,” he said. “Having excess funds derived from better-than-expected tax receipts and federal aid allows the state to address many needs associated with COVID.”

Moody’s said the upgrades reflected “a significant increase in resources combined with agile financial management that has resulted in balanced or nearly budgets projected through the state’s five-year financial plan.” The outlook was revised to stable from positive.

New York state, city, county and related agencies sold over $48.21 billion of debt in 2021, the third most in the nation.

The budget uses $81 billion in federal funds, mostly for Medicaid and other health programs with K-12 schools, welfare, child care, homeland security and transportation programs getting the rest. State tax revenue is also running well ahead of projections, according to the comptroller’s office.

The fiscal 2023 budget also approved the addition of $1.2 billion to be tacked onto the referendum on the Clean Water, Clean Air, and Green Jobs Environmental Bond Act, bringing the total to $4.2 billion of bonds that voters will decide on in November.

In addition to the bond act, the budget contained $400 million for an Environmental Protection Fund, which will support climate change mitigation projects, protect water sources and promote conservation efforts. It also includes a $500 million investment to develop the state’s offshore wind supply chains and port infrastructure.

Supporters say about 2,000 jobs are expected to be created with these investments.

“Climate change and environment-focused bond issuance is a good ongoing investment,” Hallacy said. “Some jobs will be created from the greater levels of bonding and construction.”

The agreement includes a $20 billion multi-year healthcare spending plan, with $1.2 billion dedicated to frontline healthcare worker bonuses as well as a $4.5 billion for payment system reforms. Other spending includes $2.4 billion to improve healthcare infrastructure and $3.9 billion to provide aid to hospitals struggling financially in the wake of the COVID-19 pandemic. Another $7.7 billion will be spent over four years to increase the home care worker minimum wage by $3.

“As with all budgets that significantly increase spending, concerns are over where the budget adds recurring spending without any restraints on programs,” Cure said. “This could include the following: a $7 billion investment to subsidize childcare costs; increasing the minimum wage of healthcare workers; and expanded care for undocumented immigrants.”

“Safety net spending and greater healthcare spending is sound in the near term, but could create outyear spending pressures,” he said.

The budget also includes Hochul’s $600 million commitment from the state to subsidize a new stadium for the National Football League’s Buffalo Bills.

“I find it of dubious worth to have $600 million in state funds given for a new Buffalo Bills football stadium along with $250 million in capital and maintenance subsidies,” Cure said. “This also delayed the passage of the budget as legislators were apparently surprised by this late insertion.”

The budget includes tax relief for residents as well as well as a plan to temporarily suspend fuel taxes from June 1 to Dec. 31 to lower the rising costs of gasoline and diesel fuel.

“Keeping a cap on taxes is proactive given pressures that lead to businesses seeking out other locations,” Hallacy said.

The budget includes a $32.8 billion five-year capital plan for programs and proposed projects administered by the state Department of Transportation. The adoption of this new capital plan, the largest ever for the state’s transportation infrastructure, represents a $9.4 billion, or 40.2%, increase over the prior five-year plan period.

Additionally, it creates a $25 billion five-year housing plan that aims to create or preserving 100,000 affordable homes, including 10,000 homes with support services for vulnerable populations.

A new ethics oversight entity was created called the Commission on Ethics and Lobbying in Government, to replace the Joint Commission on Public Ethics.

“It is clear that JCOPE is irreparably broken and has failed to earn the public’s trust,” Hochul said in January when she announced her proposal to improve ethics oversight.

The state’s perceived troubles with corruption were underscored this week when Hochul’s lieutenant governor, Brian Benjamin, resigned after federal charges of bribery and wire fraud were brought against him.

The new ethics commission is supposed to work differently and more transparently than before and will be required to hold an annual meeting to report on its activities and hear feedback from the public.

Cure noted that New York City didn’t come out ahead in the final budget.

“New York City didn’t fare too well since there still needs to be addressed the renewal or replacement of 421-a housing policy, which offers tax breaks to developers in exchange for affordable housing,” Cure said. “Also, there was no extension of the mayoral control of city schools.”

Additionally, the budget didn’t include the additional debt capacity for the city’s Transitional Finance Authority that Mayor Eric Adams had asked for.

Adam proposed to raise the TFA’s bonding limit by $19 billion from the current authorization of $13.5 billion.

The mayor and City Comptroller Brad Lander sparred over the increase, with Lander saying additional bonding capacity was not necessary.

By the end of April, the mayor will release a revised executive budget, the Council will issue its response and hold a second round of hearings in May. Then the Council and the mayor and his Office of Management and Budget will negotiate adjustments. By law, the 51-member council must vote on a balanced budget by July 1.