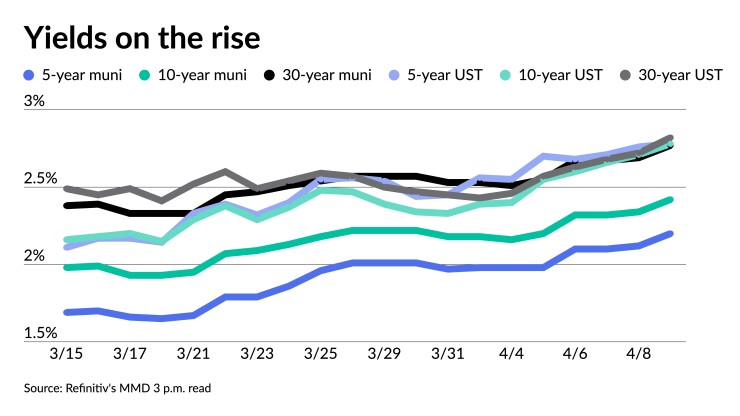 Triple-A benchmarks were cut up to nine basis points to start the holiday-shortened week ahead of a smaller new-issue calendar, while long U.S. Treasuries hit three-year highs and equities sold off on inflation concerns.

Triple-A yields continue to rise, with the two-year muni just below 2%, the five well above and the 10-year approaching 2.5%.

Secondary selling pressure was evident out of the gates, trading flows were high for a Monday and pressure was felt across the curve.

Municipal underperformance is being driven by curve positioning, with longer-dated bonds underperforming, noted Nuveen in a Monday report.

“Rising rates do not necessarily correlate to losses in bond portfolios, and attempting to time markets can negatively impact performance,” Nuveen said.

“In five periods where municipal yields increased by at least 100 basis points in less than one year, the principle value of a hypothetical portfolio based on Bloomberg Municipal Bond Index returns was higher 12 months after the rise in rates,” the report said.

Barclays strategists are getting more confident on the market for the rest of the year after being apprehensive heading into 2022 and for most of the first quarter. Municipals have recovered in the past and total returns in the following three quarters have often been positive, according to strategists Mikhail Foux, Clare Pickering and Mayer Patel.

Furthermore, Treasury rates are often the key driving force behind tax-exempt performance. Despite volatile rates, they believe, the balance sheet run-off can no longer be a catalyst for higher rates; forward real rates appear to be too high given low estimates of the neutral rate and the risk of a hard landing; and upcoming data should support a long-duration bias.

However, they said, there may still be opportunities for investors subject to the 21% federal corporate income tax to pick up improved yields in the tax-exempt market. For example, double-A tax-exempt yields in 22-years and longer closed Friday higher than the after-tax yields for double-A corporate or taxable muni benchmarks.

CreditSights said most muni credit indices saw their spreads widen last week, although they are still substantially tighter than they were at the end of February. The triple-B index was the lone holdout, finishing the week unchanged at +49 basis points.

“Given the volatile market conditions, we view the spread changes for the muni indices to be descriptive of broad relative movements in the market, but we expect that tenor-specific fluctuations may not be fully captured in the day-to-day movement of the indices,” they said.

The benchmark yields on double-A revenue bonds, for example, tightened in five and 10 years but widened in 30 years.

Primary to come:
The Regents of the University of Minnesota (Aa1/AA//) is set to price $500 million of taxable general obligation bonds, Series 2022. Barclays Capital.

The President and Fellows of Harvard College, Massachusetts, (Aaa/AAA//) is set to price Tuesday $500 million of taxable bonds, Series 2022A. Goldman Sachs.

Rumor has it that Dogecoin could shift to proof-of-stake — What does that mean for miners?
Chicago mayor promotes city’s fiscal progress amid reelection campaign
Mortgage demand took a big step back last week, even after interest rates fell further
🔍 What is Open Interest and Why is it Important When Trading Options
Sunak faces crunch decision on post-Brexit Northern Ireland