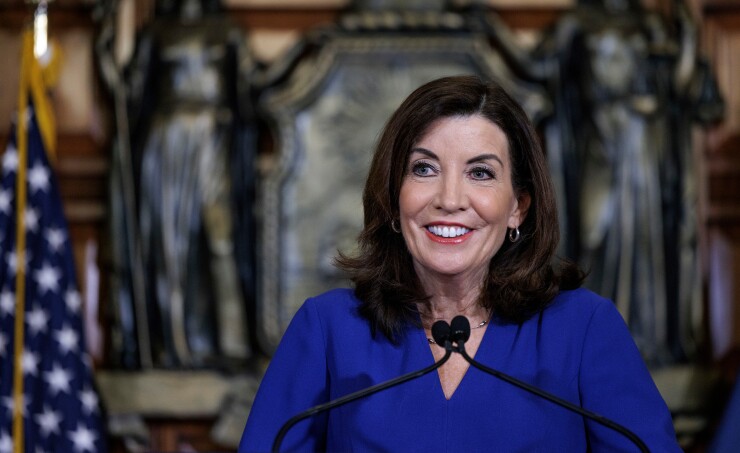 New York Gov. Kathy Hochul and the state Legislature have reached an agreement on the state’s $220 billion fiscal 2023 budget, the governor announced in Albany Thursday evening.

The spending plan is up more than $4 billion from the original $216.3 billion executive budget that the governor proposed in January.

With the agreement in place, the state Senate and Assembly are expected to work through the weekend on the final details, vote on the plan and send it on to Hochul for her signature. The budget is over a week late; New York’s fiscal year began April 1.

The budget includes tax relief for residents as well as well as a plan to temporarily suspend fuel taxes from June 1 to Dec. 31 to lower the rising costs of gasoline and diesel fuel.

The governor also promoted the $4.2 billion environmental green bond referendum that is on November’s ballot.

She noted the recent storms and past hurricanes that have hit the state.

“We saw what can happen, how devastating it is. We have to build back resiliency around our communities and protect them,” she said.

The budget also includes proposals to help those affected by the COVID-19 pandemic.

It will help support small businesses like restaurants by allowing the sale of alcoholic beverages to-go and includes billions of dollars to rebuild the health care workforce and support home care workers.

Citizens Budget Commission President Andrew Rein said there was both good and bad news in the new spending plan, but that many details were not yet available.

“While many stakeholders will be pleased with the significant funds allocated to an array of programs, the state does not appear to have sufficiently balanced priorities between relief and recovery now and protecting future New Yorkers from the next emergency or recession,” he said in a statement. “The reported set aside of reserves equal to 15% of state operating funds is important, substantial, and welcome; these funds all should be deposited in a locked Rainy Day Fund.”

However, he said the budget adds billions of dollars of recurring spending with apparently no commensurate actions to restrain spending growth in other areas.

“This would cause significant future fiscal stress, which is especially concerning given the rocky recovery, global instability, and inflationary pressures,” he said.

The budget also includes a $600 million commitment from the state that will go toward a building a new stadium for the National Football League’s Buffalo Bills. The state and Erie County together will kick in a total of $850 million toward building the $1.4 billion stadium in Orchard Park for the team’s billionaire owners Terry and Kim Pegula.

Municipal bonds are expected to be sold to finance the construction.

The deal secures a 30-year commitment from the Bills to stay in Buffalo, Hochul and Erie County Executive Mark Poloncarz announced last month.

Several progressive state legislators had opposed the plan on the grounds that it gave record high subsidies to billionaire team owners. But nonetheless it remained in the final version of the budget that’s being considered now.

New York City Mayor Eric Adams said while the budget includes many of his priorities for the city, there was still more work to be done.

“The details of the budget deal are still emerging, but it is clear many of my top priorities and key elements of my ‘People’s Plan for New York’ will be included,” Adams said in a statement Friday. “This means millions will go directly into the pockets of working-class New Yorkers through an enhanced Earned Income Tax Credit … While I commend the Legislature and the governor for making some progress on public safety, it is also evident that a good deal more work will be needed on this issue.”

New York City Comptroller Brad Lander applauded the Legislature’s decision in excluding from the budget 485-w program, a revamped version proposed by Hochul of the current 421-a, which is a tax incentive program for new residential development.

“Lawmakers made the right call in declining to rush through a tweaked version of the 421a tax exemption program that would still amount to an egregious giveaway of billions of public dollars for barely an iota of housing affordable to New Yorkers,” he said in a statement. “Now, with three months remaining until the expiration of the 421a program on June 15, we have an opportunity to fix what’s broken in New York City’s property tax system, level the playing field for rental housing construction, and finally target our affordable housing tax exemptions to actually affordable housing.”