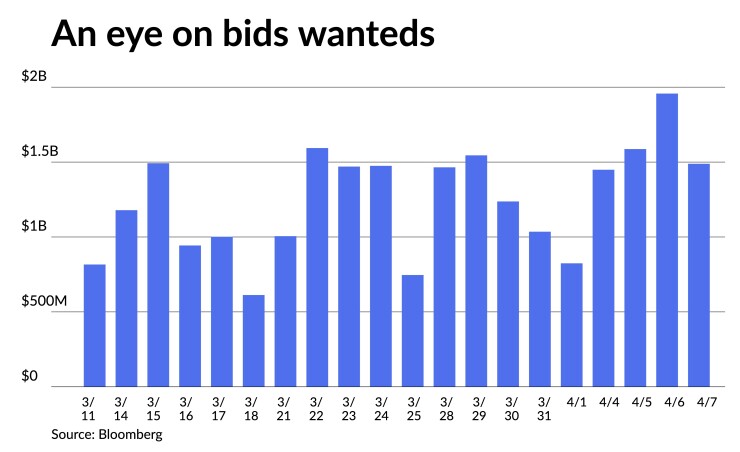 Municipals were weaker in spots Friday after another challenging week and the worst-performing first quarter since 1980.

Triple-A yields rose one to three basis points amid lighter trading ahead of a smaller new-issue calendar. U.S. Treasuries saw more pronounced losses to close out the week.

Supply for the holiday-shortened week is $4.769 billion — about half of the issuance from the week prior — with $3.633 billion of negotiated deals and $1.347 billion of competitive loans. Thirty-day visible supply sits at $12.8 billion.

The primary calendar is led by $500 million of taxable general obligation bonds from the Regents of the University of Minnesota, which is weighing a mix of maturity options as it confronts a volatile market for a $500 million sale originally planned as a century bond.

Another large taxable deal, $500 million, from the President and Fellows of Harvard College, Massachusetts, is on the docket as well $383 million of revenue bonds and revenue refunding bonds from the Anaheim Housing and Public Improvements Authority, California.

The California Public Works Board is expected to come with $293 million and the Fremont United School District, California with $126 million in the competitive calendar.

Due to a combination of rich valuations at the start of the year, a 100-plus basis point rise in Treasury rates and some of the heaviest fund outflows in recent history, the first quarter of 2022 was extraordinarily awful for munis — it was the worst first quarter for high grades since 1980. Indeed, rising rates have a negative impact on all fixed-income products, but municipals, which generally outperform, did not do so this time, according to Barclays PLC.

However, Barclays strategists Mikhail Foux, Clare Pickering and Mayur Patel are more positive on the market in the medium term.

“However, we are getting more positive on the market … At current levels, a lot of bad news has already been priced in, and if Treasury rates stabilize at current or even somewhat higher levels, we should see outflows subsiding.”

The outflows have put additional pressure on the market, and muni valuations are cheap enough to outperform Treasuries for the remainder of the year, they said.

In the past, quarters with the worst municipal returns were followed by considerably stronger ones, and Barclays strategists expect this trend will continue in the second quarter.

However, they said that the municipal market lags behind other fixed-income asset classes in some areas, pointing out that as global investor focus has shifted toward ESG investment in recent years, munis have been late to catch on.

They cited a supply-demand imbalance in the muni ESG sector as one factor. Municipal issuance has lagged well behind corporate issuance, but it continues to outpace money allocated to municipal ESG investments.

This year’s issuance has lagged behind their expectations due to market volatility, which has kept many issuers at away while also lowering demand for the product, and the $1.2 trillion infrastructure package passed last year included some environmental stipulations.

“These funds may have been used instead of muni bond financing, and a substantial portion of those bonds could have been green,” they said. “Muni ESG-labeled bond issuance is also lagging the corporate market significantly.”

Primary to come:
The Regents of the University of Minnesota (Aa1/AA//) is set to price $500 million of taxable general obligation bonds, Series 2022. Barclays Capital.

The President and Fellows of Harvard College, Massachusetts (Aaa/AAA//) is set to price Tuesday $500 million of taxable bonds, Series 2022A. Goldman Sachs.