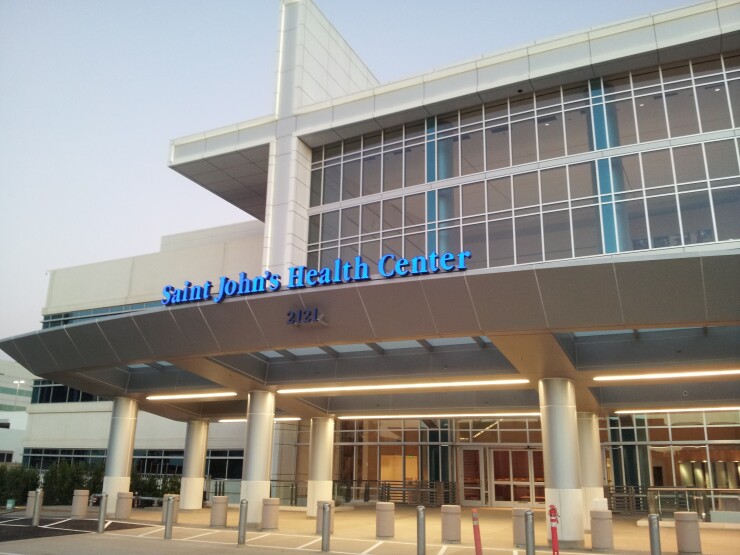 The ratings of Providence, a not-for-profit healthcare system, were downgraded to A1 from Aa3 by Moody’s Investors service following its split with Hoag Hospital in Orange County, California.

The downgrade comes as a result of a disaffiliation with Hoag Hospital and the expectation that weaker operating, balance sheet and debt measures will continue for the time being, Moody’s said in Tuesday’s report.

Moody’s downgraded the ratings on Providence, Washington’s revenue bond debt to A1 and A1/VMIG1 from Aa3 and Aa3/VMIG1. Analysts also downgraded the debt of St. Joseph Health System, California, which is part of Providence, and has the same security as debt issued by Providence to A1 from Aa3.

The outlook is stable. The downgrade affects $6.3 billion of debt.

The split comes as Providence is facing a host of other challenges, including significant and persistent operating pressures, variable utilization, and weaker liquidity making it more difficult for the hospital system to absorb the impact at its previous rating level, Moody’s analysts wrote.

“Other ongoing challenges include pressure from payers, exposure to labor unions, material competition in many markets, the reliance on temporary labor, and persistent underperformance in certain markets, including the Puget Sound and southern California,” the report said.

Providence was formed when Providence Health & Services and St. Joseph Health System merged on July 1, 2016. It is headquartered in Renton, Washington and operates in Alaska, Washington, Oregon, Montana, California and Texas.

Providence and Hoag announced in mid-January they would officially separate on Jan. 31 with Hoag becoming independent from Providence and Covenant Health network, the structure that governs the affiliation, in a release posted on the Municipal Securities Rulemaking Board’s EMMA website.

After nearly a decade together, hospital leaders from Providence and Hoag said a separation was the best path forward for each organization.

“This move opens up new avenues of collaboration in the future, as each institution brings its unique strengths to bear in service of patient health,” said Robert Braithwaite, Hoag’s chief executive officer and president in the January release.

Fitch Ratings and S&P Global Ratings, which both rate Providence AA-minus, placed the ratings on negative watch, and CreditWatch with negative implications, respectively, following news of the split.

“While details are not yet available, and while Hoag Health is a much smaller entity than Providence, we believe that the separation will put some financial strain on Providence,” S&P Global Rating credit analyst Suzie Desai said in January. “Providence already has a lighter overall financial profile relative to the rating, primarily given that Hoag will leave the system with sizable unrestricted reserves.”

Moody’s analysts said the A1 rating and stable outlook reflects its expectation that Providence will continue to benefit from a number of well-established and organization-defining strengths which should provide it with a certain amount of stability at the A1 level.

The strengths Moody’s cited include a large, mostly contiguous, service area covering much of the western United States; a very large revenue base of over $25 billion; leading market share in all of its markets; diversification and continuous investment of cashflows; and an integrated care delivery platform which includes significant inpatient and outpatient services, employed physicians, and a health plan.

“We expect PSJH to continue to grow its operating platform, generate additional revenue growth, and generally maintain its current amount of leverage,” Moody’s analysts wrote. “The stable outlook reflects our expectation that operating, debt, and liquidity measures will not weaken from their current proforma levels (incorporating the disaffiliation with Hoag), and that all measures will slowly improve over time.”

Affirmation of the VMIG 1 short-term ratings on debt supported by standby bond purchase agreements reflects the agreements with and the credit quality of the corresponding banks, Moody’s wrote.

My Stock Dropped Over -20% – What Should I Do?
4.5-Acre Oceanfront Maui Property Hits The Market For $5.5 Million
JPMorgan: 72% of Institutional Traders Surveyed ‘Have No Plans to Trade Crypto’
Visa’s crypto strategy targets stablecoin settlements
POB issuance plunge expected to continue