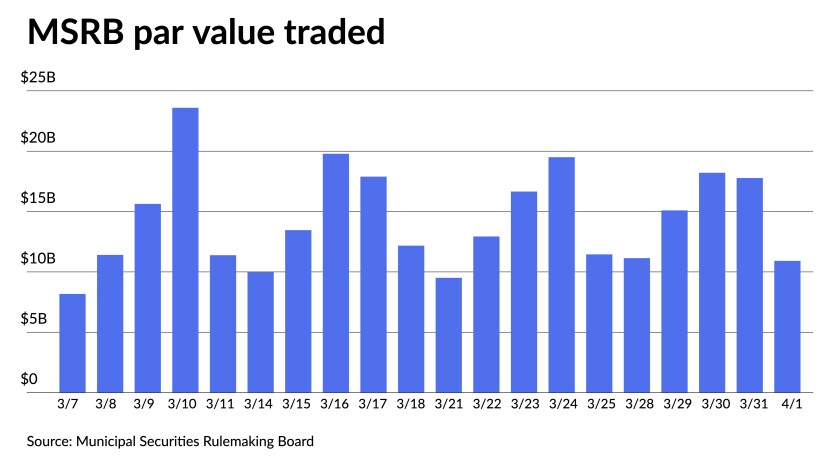 Municipals were steady to firmer in spots Monday, while U.S. Treasuries strengthened inside five years but key parts of the curve remained inverted while equities ended in the black.

Triple-A municipal yield curves were relatively stable, while the two-, three-, five- and seven-year UST were still sitting above the 10- and 30-year.

More activity surfaced in the municipal market on Monday as the first full week of the second quarter got underway and after last week ended with more of a bid from retail accounts.

“We have seen some pretty good situations coming out on the longer end; the maturities have a firmer tone compared to last week,” a New York trader said Monday afternoon.

The overall appetite for municipal bonds, he said, picked up noticeably at the end of last week.

“I would say just because ratios got to such cheap levels people are now willing to get involved,” he noted, adding the window of opportunity is bringing in crossover buyers, like arbitrage accounts.

“They seemed to reappear after last week when munis got beyond 100% of Treasuries. That makes it interesting for investors,” he said.

Although this week has a heavy calendar of large “mega deals,” he expects demand to be solid. “Outside of that, I would say the calendar is pretty manageable and the demand is still very strong.”

The Bond Buyer 30-day visible supply sits at $17.08 billion. As supply ticks up after a lackluster start to the year, retail will need to step in.

It is the authority’s first 100% green deal and also the first ever with bonds backed solely by revenue earned by specific transmission projects, instead of the authority’s underlying credit.

Municipals have taken a hit in the first months of 2022, but higher yield levels and cheaper ratios have offered possibilities for both retail and institutional buyers, said Jeff Lipton, managing director of credit research at Oppenheimer Inc.

Since the start of the year, 10- and 30-year muni rates have risen by more than 100 basis points. Similar maturity relative value ratios now stand at 92% and 103%, according to ICE Data Services at the 3 p.m. read.

For both secondary and primary business, Lipton said, retail is dipping more than a toe into the market. Although daily Street bids have been robust, they have remained below normal. Syndicate bidding is cautious, despite competitive agreements being completed. To be comfortably placed, negotiated deals are priced at lower levels, Lipton said.

Although munis had a bid late in the week, total fund flows were once again negative, according to Refinitiv Lipper. “There is still outsized volatility and liquidity challenges that lie ahead, but maybe more extended relief is not too far off,” Lipton said.

Municipal exchange-traded funds experienced inflows, even as the overall fund complex saw outflows. Part of that may be due to crossover buyers as the higher yields have settled in.

“While many retail investors are reducing their mutual fund positions, relative value investors are putting money to work, and we believe that part of that money is finding its way into muni ETFs,” CreditSights said in a report.

Muni yield movements are closely tracking the Treasury market’s high volatility, Lipton said, and it will likely require a calming of that volatility, as well as a more favorable technical muni backdrop, to ignite persistent market conviction and sustained outperformance.

Although muni bond prices may have some potential to fall further, Lipton expects yields will trade range-bound as better technicals loom on the horizon. He said it’s possible that Treasury market volatility won’t subside until after the Federal Open Market Committee meeting in early May, and if that’s the case, there won’t be a return to continuous muni inflows until then.

Many issuers are anticipating the Fed’s actions in the impending policy sessions and are concerned about a recession. The lower supply so far in 2022 has been exacerbated by the conflict in Eastern Europe and UST curve inversions, Lipton said.

Surprisingly, taxable issuance has increased month-over-month but decreased year-over-year, stemming from, in part, several prominent colleges issuing long-term taxable debt to lock in existing rates and stockpiling capital that does not need to be designated like tax-exempt bond proceeds, he said.

“While we do not see any realistic chances of new higher taxes on the horizon, any ramped-up discussion could very well turn out to be accretive to muni bond performance,” he said. “Even without higher taxes, munis can be expected to book positive performance when volatility subsides and flows turn positive.”

Treasury yields rose outside the five-year and equities ended in the black.

The Cities of Dallas and Fort Worth, Texas, (A1/A+/A+/AA/) is set to price Wednesday $1.188 billion of taxable Dallas Fort Worth International Airport joint revenue improvement bonds, Series 2022A, terms 2051 and 2051. Citigroup Global Markets.

The Board of Regents of the University of Texas System (Aaa/AAA/AAA/) is set to price Tuesday $302.045 million of revenue financing system bonds, Series 2022A. Morgan Stanley.

The Dormitory Authority of the State of New York (//BBB-//) is set to price next week $110 million of Wagner College revenue bonds, Series 2022. Morgan Stanley.

Christine Albano contributed to this report.

Millionaire Renters Have Tripled Since 2015
Bitcoin clings to $23.5K as trader says BTC ‘identical’ to 2020 breakout
Florida County Map Shows Where The Income Gap Is Biggest
Robots could surpass workers at Amazon by 2030, Cathie Wood says
Nashville Estate Loved By Country Music Celebrities Is Up For Absolute Auction