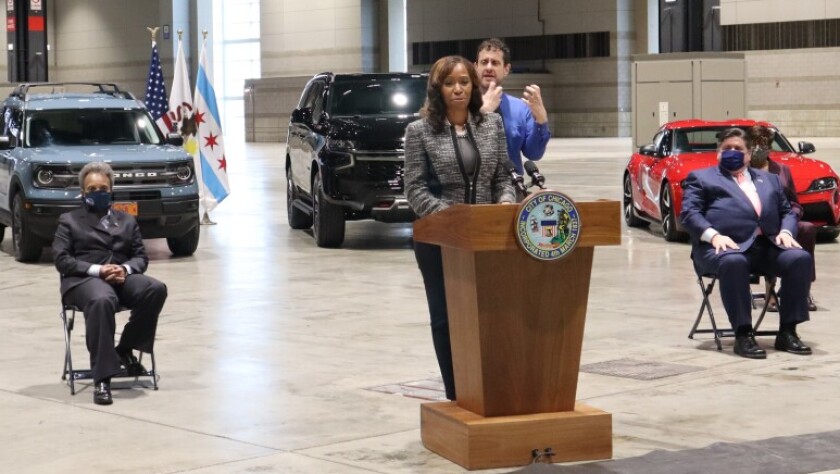 The Metropolitan Pier and Exposition Authority’s tourism-related taxes — which took a pandemic-driven beating — have generated enough revenue to meet this year’s scaled-down debt service but challenges loom as debt service ramps up.

The agency last year restructured debt service coming due in fiscal 2022, providing some breathing room by lowering the overall tab to $113 million from $260 million and allowing the agency to avoid having to tap a state sales tax backup pledge, as it did in fiscal 2021.

The agency generates operating funds from hosting shows, conventions and other events at its McCormick Place Convention Center campus and hotels while it repays its $3.1 billion of outstanding debt with taxes on food and beverages, car rental, hotel taxes, and airport departures although state sales tax provide a backstop.

Operating losses stung the agency as the convention business ground to a halt in March 2020. Convention business resumed with a phased-in reopening and MPEA doesn’t expect McCormick Place to return to 100% of its regular event schedule until fiscal 2024, with a return to operating profitability forecast for fiscal 2025. Tax collections are on the rise and above budget but still below pre-pandemic levels.

“With our solid performance in the first nine months since re-opening, including operating through two major COVID surges, we feel very optimistic about the future,” MPEA Chief Financial Officer Jason Bormann said. “The 2022 convention calendar is very strong and we continue to see good progress toward recovery.”

MPEA is well-positioned to replenish a meaningful portion of the $30 million reserve fund in FY22, allowing it to repay $10 million in unreimbursed sales tax draw over the next three fiscal years, the agency said in a statement.

The agency drew from the $30 million reserve to manage the early blows of the COVID pandemic but for fiscal 2021, it needed a $10 million draw on state sales taxes that provide a backup pledge on debt service should the agency’s tourism-related taxes fall short. Scooping-and-tossing some debt service and having working cash available also provided salve for the pandemic-created wounds.

The MPEA statute requires it replenish reserves before repaying the state for the unreimbursed sale tax draw. The agency’s last draw — $57 million — occurred after the 2008 financial crisis. It wasn’t completely repaid until fiscal 2019.

Long before the pandemic cut into tax collections, the agency began undertaking a series of scoop-and-toss debt restructurings due to the steep debt service schedule that relied on optimistic tax growth. Officials have long anticipated the need for future ones.

The agency also expects to close the fiscal year with $173.8 million in operating revenues based on the first seven months of actual results and projections for the final five months, up $30.6 million from earlier projections, leaving the agency with a $34.5 million operating loss.

The authority anticipates operations for the first half of fiscal 2023 at 75% of fiscal 2019 operations, with the projected combined operating loss following debt service on the authority’s project revenue bonds for 2023-25 estimated at $7.6 million.

The authority in September 2020 sold $161 million of project expansion new-money and refunding bonds to restructure debt and ease fiscal 2021 pressures. State lawmakers paved the way for the restructuring by raising the amount of state tax deposits pledged as a backup for debt service and allowing the authority to use its remaining expansion project bond authorization to finance working capital expenses during fiscal 2021 and fiscal 2022.

In addition to the restructuring of fiscal 2022 debt service, the authority’s 2021 $811 million deal included a forward-delivery current refunding of about $700 million of debt for present value savings.

The authority closed March 17 on the deal that generated $135 million of present value savings. Officials estimate the savings associated with the 3.09% rate generated $85 million more in savings than if the agency had waited to refund the bonds, given the rise in rates this year and market turmoil.

MPEA trimmed its spread penalties in what was the first primary outing of an Illinois-linked borrower to reap the benefits of the state’s positive rating momentum.

Like the state, MPEA’s spreads have since widened due to market volatility that has hit lower-rated credits harder than better-rated ones. The 30-year that landed at a 98 bp spread is currently evaluated at a 155 bp spread. Illinois’ 10-year is at a 113 bp spread compared to the 63 bp spread at the start of the year.

The authority reported in its final official statement updated in March that 302 future events have been booked for the convention center, including cancelled events now rescheduled, with an estimated attendance of more than 6.9 million attendees.

Last July, S&P Global Ratings upgraded MPEA to BBB-plus with a stable outlook, citing its recent upgrade of Illinois to BBB from BBB-minus. S&P caps the rating at one notch above the state. It moved the outlook to positive last fall in tandem with similar action on the state.

Kroll Bond Rating Agency assigned a first-time rating of AA-minus with a stable outlook to the 2021 deal.

Two of the five proposals submitted last year to the city to build its first casino proposed either converting the older of two main convention center buildings or lots now used by trucks to house the casino. Authority CEO Larita Clark warned the proposals could damage existing business and might require state legislative action.

Mayor Lori Lightfoot opted to toss those two proposals, and her casino review team is considering the remaining three with a decision expected later this year. “MPEA and convention center business drives $1.9 billion of economic impact for the city based on 2019 events. Losing even one convention due to a casino could have significant adverse impacts on city and state revenues and jobs,” reads the city’s evaluation released March 22.

Uzbekistan Collects Over $300,000 From Crypto Sector
Sunak faces crunch decision on post-Brexit Northern Ireland
Survey says: 2023 issuance will be the same; rates will rise
Stocks making the biggest moves before the bell: Apple, Alphabet, Amazon, Starbucks and more
China sharply rebukes US over decision to shoot down spy balloon