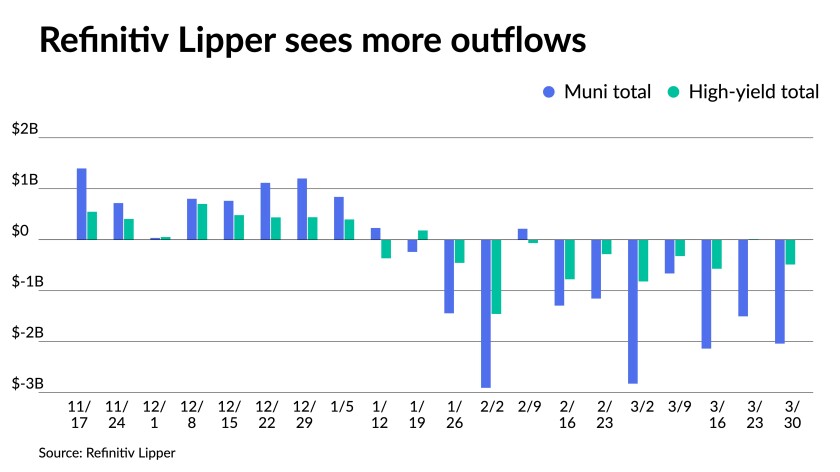 Municipals were better Thursday as triple-A benchmark yields fell while U.S. Treasuries were mostly steady and equities ended down.

Exchange-traded muni funds reported inflows of $372.255 million after inflows of $126.536 million the previous week while high-yield saw outflows to the tune of $485.719 million after $10.501 million of inflows the week prior.

﻿Continued stability helped prop up the municipal market on Thursday, a day before the arrival of the second quarter.

“The municipal bond market today has a more constructive feel to it as it seems to be trying to form a short-term bottom,” Michael Pietronico, president and chief executive officer at Miller Tabak Asset Management, said Thursday.

“Absolute yields have moved up to levels that are much more competitive versus other asset classes, which bodes well for a positive start for April,” he said.

Should a floor develop in prices causing mutual fund redemptions to slow investors may be surprised how quickly municipal yields stabilize, and potentially fall in small increments, Pietronico said.

“The market is oversold as most of the fixed-income class is so investors should not expect a repeat of the first quarter’s dismal returns in the coming months,” he said.

Finally seeing a little stability has been a relief to investors of the municipal market, according to Matthew Gastall, executive director and head of wealth management municipal research and strategy at Morgan Stanley.

Municipals have a laggard response to the volatility so mutual fund outflows may continue until sustained Treasury stability continues, he said.

“In past periods in 2013, 2016, and 2018 we did see quick outperformance of munis to Treasuries once stability ensued,” Gastall said, noting the outperformance was due to municipals’ high coupon structures, tax efficiencies, and wealth preservation.

“We did see that in past periods and it is notable moving forward,” he said.

If rates rise and supply is healthy, Gastall recommends putting money to work and focusing on above market coupon structures, kicker bonds with short calls. “It’s not a question of investing but what to invest in,” he said.

Investors can currently earn 80% of the yield curve in five years, with a lot of the value up front on the curve.

For investors who want to extend, Gastall strongly advocates a kicker structure, mostly because of the high coupons and relatively short calls.

Overall, Gastall said he is keeping an eye on Friday’s jobs number, as well the broader economy and geopolitical impacts of oil prices and inflation.

“Supply has been manageable and that will continue,” he said. “Now after the rate moved higher, a lot of the taxable refinancings are out of the money, and we’re back to seeing a portion of tax-exempt supply return.”

Municipal issuance fell 17.6% year-over-year in March led in part by a drop in refunding volumes amid market volatility and a rising-rate environment, but the total $39.4 billion figure is above the $34.363 billion 10-year average.

Thirty-day visible supply is at $16.11 billion, per Bond Buyer. Gastall expects a healthy calendar in April and May as typically the municipal market experiences ahead of summer redemption season.

“There are a lot of things that could create more opportunity over the next few months, and we will see if munis outperform once we see more stability,” he said. “We are keeping an eye out for more value in the next quarter.”

Treasury yields fell and equities were down.

Inflation still wreaking havoc
Thursday’s economic data gave a glimpse of the impact inflation has had on consumers, analysts said.

“Consumers are only beginning to feel the crimp of inflation, which will continue to get worse before it gets better,” said Grant Thornton Chief Economist Diane Swonk. “The Fed is well aware of that and now ready to chill an overheating economy. Bundle up.”

While the headline number showed spending grew 0.2% in February, after adjusting for inflation, it actually fell 0.4%, she noted. The personal consumption expenditure deflator climbed 0.6% in the month and 6.4% year-over-year. “That is the hottest annual pace for the overall deflator since January 1982,” Swonk said. “It is worth noting that this was before the boost to commodity prices we saw after Russia invaded Ukraine.”

While the personal saving rate crept up to 6.3% in the month, Berenberg Capital Markets Chief Economist for the U.S. Americas and Asia Mickey Levy noted, it “remains significantly below its 2019 average, suggesting households are continuing to draw on savings to meet current spending needs and smooth consumption in the face of accelerating inflation.”

Inflation won’t slow anytime soon, he said. “Measures of headline inflation are likely to rise further in the near term, driven by the steep run-up in food and energy prices through March, and core inflation is likely to remain elevated, reflecting increased demand for services and the lagged impact of rising rent and home price appreciation.”

But some analysts were optimistic.

“February marked the seventh straight month in which inflation outpaced income, raising doubts about consumer spending stamina,” said Wells Fargo Securities Senior Economist Tim Quinlan and Economist Shannon Seery. “Yet, even with inflation at a 40-year high, the 0.4% drop in real spending in February might be overstating the burden and be more of a reflection of an upward revision that made January one of the best months on record for real spending.”

And while inflation will continue to tamp spending, they said, there are “some notable factors helping households.”

First, many consumers remain “in decent financial shape,” Quinlan and Seery said, “and this should not be overlooked.”

Also, rising wages are “beneficial to households even if inflation is currently eating into much of the recent gain,” since. households can use their savings. “We expect households to save less in the near term to offset some of the hit to purchasing power from rising inflation. If they don’t, spending could falter more than we presently forecast.”

Jobs, rather than the Federal Reserve, will be key to cutting inflation, said Bryce Doty, senior vice president/portfolio manager of Sit Investment Associates. “Jobs will do more for easing supply shortages and lessening inflation pressure than anything the Fed can achieve by raising interest rates.”

While rate hikes will lift the cost of purchasing a home or a car, they also push “up companies’ interest expense of which gets passed onto consumers as price increases,” Doty said.

The economy is suffering from a lack of workers to meet the needs of consumers, he said. “So, counter to conventional wisdom, more job creation reduces how high the Fed will need to raise rates before we see a relief in inflation pressures.”

Still, the inversion of parts of the yield curve has some worried.

Padhraic Garvey, ING’s regional head of research, said he’s watching the two year/five year, which has yet to invert. “It likely will,” he said. “But even if it does, history tells us that we could still be years from an actual recession.”

The curve, flattening and in parts inverting, suggests “Fed hikes will dampen future growth and shove the economy into recession,” said Jason Brady, president and CEO at Thornburg Investment Management.

The Fed’s average inflation targeting lead it to fall behind the curve, he said, “forcing the Fed to raise rates faster and therefore making a hard landing virtually inevitable.”

Recession is a possibility, according to Lindsey Piegza. “With the Fed vowing to raise rates ‘aggressively,’ we estimate the risk of a recession has jumped to well over 50% within the next 21 months,” she said.

But some analysts question the predictive powers of an inversion, Piegza said, “given the perversion of the markets mostly due to unprecedented policy intervention. And there may be some truth to that given the unprecedented levels of quantitative easing the U.S. and other developed central banks have engaged in.”

The Fed needs to act quickly to regain credibility, said Sebastien Galy, senior macro strategist at Nordea Asset Management. “The Federal Reserve needs to bring the terminal rate or long-term interest rates into positive territory as fast as possible … to avoid an uncontrolled spread of the wage inflation spiral.”

Should the Fed fail, he said, the U.S. will fall into recession. Monetary policy works with a six- to 18-month lag, he said, and “likely longer” with a hot economy. “This is a very long-time for the Fed to decide whether it wants to go ahead of the curve and not run behind inflation.”

And while Galy suggests the Fed “will probably need to turn far more hawkish,” but with midterm elections ahead, that may be difficult.