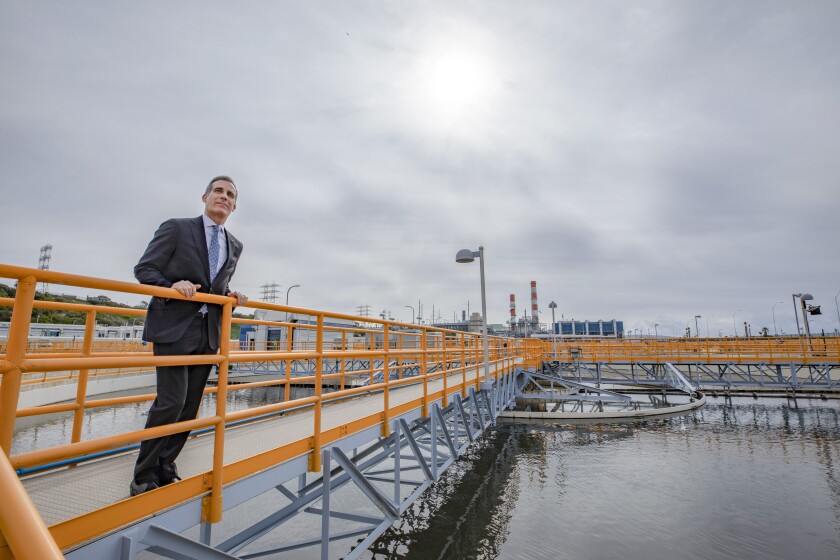 Los Angeles’ finance team will be counting on its wastewater system’s record as “a large and frequent issuer with strong market access” when it prices $168.4 million in wastewater revenue bonds next week.

The city comes to market after it took a reputational hit last summer when a system failure at its Hyperion Water Reclamation Plant in southwest Los Angeles released 17 million gallons of sewage into the Santa Monica Bay.

Los Angeles is selling into a municipal bond market that has seen multiple weeks of outflows from mutual funds, creating challenges for issuers.

“Current market conditions are volatile and credit spreads have widened in 2022, but we expect our bonds will enjoy good market reception as we saw in the pricing of our Series 2022-C Bonds,” said Ha To, the city’s debt manager.

The deal comes after the wastewater system sold a $380.6 million refunding of subordinate revenue bonds priced by bookrunners Jefferies and Goldman Sachs on March 15. The refunding bonds sold for 104.2 at 1.33% yield for the 2023 maturities and 124.9 at 2.25% yield for the 2032 maturities. The entire deal had 5% coupons.

The debt being issued next week won’t be used to cover the cost of cleanup from the July 2021 spill, Ha said.

The proceeds of next week’s deal will repay commercial paper sold to support its ongoing capital improvements program.

The current capital improvements focus on installation and replacement of sewers and pumping stations and modernization of wastewater treatment and recycling facilities, according to the online investor presentation for the deal. Water reclamation is a critical component of increasing local water supply as part of the “Zero Wasted Water” program, according to the presentation.

Los Angeles Sanitation & Environment runs the wastewater system, which serves more than 4.5 million people. The Hyperion Plant, the city’s largest of four plants, treats 82.5% of the 315 million gallons of wastewater treated daily, according to a Kroll Bond Rating Agency report.

The subordinate revenue bonds were affirmed across the board at AA by S&P Global Ratings, Fitch Ratings and KBRA, a notch lower than wastewater’s senior lien revenue bonds. Fitch and Kroll assign stable outlooks.

S&P revised its rating outlook to negative from stable on Feb. 9 citing “weakened risk management practices” under its ESG criteria.

“We believe the utility faces heightened business risks due to both shortcomings in asset stewardship around its recent sewage spill, and rate-setting practices, given the alleged failure to meet the provisions of Proposition 218,” said S&P Global Ratings credit analyst Chloe Weil.

Proposition 218, which amended the California Constitution in 1996, imposes procedural requirements on local agencies to limit property-related fees, including retail water rates. In Hoffman v. City of Los Angeles, the judge issued an interim decision that the city overcharged residential customers and violated certain procedural requirements of Proposition 218. The damages portion of the case has not been tried, but any assessed damages could be $180 million or more if a class is certified, according to preliminary offering documents; the parties are currently in mediation.

Though S&P analysts found that recent financial performance has been healthy and consistent with past levels, Weil added that “asset management and rate-setting practices are weaker than those of peers at the current rating level, which could create strain on liquidity if financial liabilities materialize.”

S&P added that it could lower the ratings one or more notches over the next two years if these vulnerabilities become substantial exposures for the agency’s credit profile.

In the July sewage spill, “the plant suffered major damage to critical equipment and vehicles,” the preliminary offering document said. Normal operations did not resume until October.

Kroll analysts say they are keeping a close watch as the department recovers from the emergency spill.

Kroll questioned in a February report whether the sewage spill might result in a shift in focus toward maintenance of the system and away from sustainability efforts, but analysts also said in an interview it could go the other way and result in an increased emphasis on sustainability.

The city’s $4 billion plan to convert the Hyperion plant from a reclamation facility to a wastewater recycling plant by 2035 is a “cornerstone of the city’s recycling efforts” aimed at replenishing groundwater and lessening reliance on imported water, Linda Vanderperre, a Kroll senior analyst, said in an interview.

The city has a goal to supply 70% of its water locally and recycle 100% of its wastewater by 2035, according to the Kroll report.

Kroll analysts called the Hyperion sewage spill a “major setback” to these efforts in the report, as the spill “undermined measures to plan for and fund projects relating to the city’s sustainability and resiliency goals.

“The 17-million-gallon spill temporarily shifted stakeholder attention away from the city’s ambitious One Water LA2040 Plan and toward the importance of daily operations and maintenance,” Vanderperre and Kroll senior director Karen Daly wrote in the report. “The incident highlights the overarching importance of emergency response planning and communication, as well as the regular inspection, repair and replacement of critical facilities and equipment.”

All of the repairs, replacements and enhancements as a result of the sewage spill “are focused not only on the present, but on long-term resilience that will be required to achieve the city’s 100% recycled water goal by 2035,” To said.

The city’s insurance carrier has informed the city that it will cover the “reasonable and necessary costs” needed to restore the plant, according to preliminary offering documents. The city had collected $15 million of insurance proceeds related to the incident, as of December 1. Repairs to the plant were considered 90% complete as of February 24, according to bond documents.

The new equipment and emergency protocol might result in improvements to the system, so that critical efforts to upgrade the plant aren’t impeded, Vanderperre said.

The city convened an ad hoc committee of environmental, water and engineering experts to assess what happened. The committee released a 53-page report in early February on what happened that included recommendations to prevent a similar incident.

“Our evaluation of management also assesses the management teams’ ability to work its way through various challenges,” Daly said. “This story is not yet completed. We are going to watch as events unfold. And let investors know what we think as this issue gets resolved.”

The deal marks the fourth time the city has issued green bonds for the wastewater system. The first was in 2015. Los Angeles doesn’t seek a third-party verification for its green bonds.

“The city has a long history of successfully selling self-certified ESG bonds, including green bonds and social bonds, and is continuing this practice for the 2022-A bonds,” To said.

The city files annual reports on the Municipal Securities Rulemaking Board’s EMMA disclosure website describing the use of proceeds from green bond sales, To said. Given that the upcoming bonds are taking out commercial paper, originally issued as environmentally beneficial, the city won’t provide additional disclosure on the use of proceeds, she said.

Though the city’s previous green bond sales have attracted ESG investors to its sales, To said, “it is difficult to quantify the pricing impact of the green label unless you sell two similar bonds at the same time, one with the green designation and one without.”