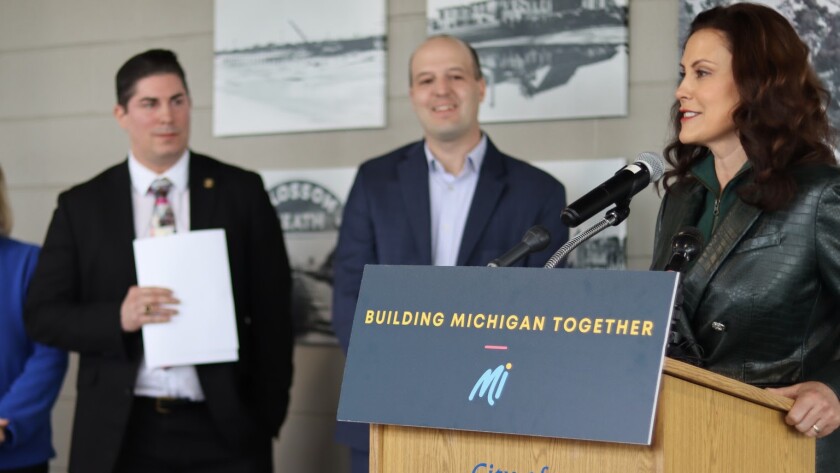 The state will mostly draw from federal funds to pay for the spending, matching one-time revenues with one-time spending that backers say protects the state’s structural balance and gives infrastructure an infusion of funding without adding debt to the state’s books.

“This supplemental uses one-time resources to make long-term strategic investments in the state’s infrastructure to improve the lives of Michiganders today and well into the future,” Christopher Harkins, the state’s budget director, said in a statement.

The package relies on $3.1 billion in federal coronavirus-related relief authorized through the various federal relief packages including $2 billion from the state’s $5.7 billion share of the American Rescue Plan Act. Another $945.4 million comes from the federal Infrastructure Investment and Jobs Act, according to a summary from the House Fiscal Agency.

The bill also draw $571.6 million from the state’s general fund, flush with a multi-billion dollar surplus from rosier than expected tax collections.

Lawmakers signed off on SB0565 last Thursday after the Senate and House’s GOP majority leaders reached an agreement with the Whitmer administration.

“The bipartisan Building Michigan Together Plan includes some of the largest investments in our infrastructure in Michigan history,” Whitmer said at an event in Grand Rapids to sign the legislation. “With this plan, we’re building on our work to improve our roads, water, and high-speed internet. I’m particularly proud of the fact that this plan makes the single largest investment in Michigan history in our state and local parks, empowering hundreds of local economies.”

While the governor, a Democrat, and GOP leaders remain divided on budget issues and tax relief, the two sides drew praise for their bipartisanship on the package.

The road funding will supplement allocations in recent budgets and the state’s $3.5 billion multi-year bonding program Whitmer turned to after her gas tax hike proposal fell victim to a political stalemate. Whitmer campaigned in 2018 on a pledge to “Fix the Damn Roads” but even with the new borrowing and infusion from the $4.7 billion package, more funding headway is needed, transportation experts warn.

The benefits will trickle down to local governments for project funding and the legislation also authorizes distribution of the second installment of ARPA funding for smaller local governments labeled non-entitlement units. That totals $322 million. The legislation also provides revenue sharing payments of $46 million from the general fund, according to a Michigan Municipal League summary.

“We look forward to leveraging these funds with resources at the local level to amplify the impact and create shared prosperity,” MML board president Barb Ziarko, who is a Sterling Heights city council member, said in a statement.

Several advocacy organizations and local officials praised the package but say more is needed to truly tackle water infrastructure needs and to make more progress on repairing roads. A 2016 report from the 21st Century Infrastructure Commission established by former Gov. Rick Snyder warned then of a $2.7 billion annual gap in transportation spending and a $1 annual billion gap for water and sewer infrastructure.

While Whitmer and the GOP cut a deal on infrastructure, they face a tougher road to reach agreement on a fiscal 2023 budget that would take effect Oct. 1.

Whitmer earlier this month vetoed a Republican proposal to cut income taxes warning the state couldn’t afford the move — estimated to cost $1.38 billion this year and $2.87 billion next year — over the long term. Whitmer also rejected a measure suspending the state’s 27.2-cent-per-gallon tax on gasoline over concerns of the impact on road projects, matching federal funds, and school funding. She has left the door open to a temporary suspension of the 6% sales tax on gas.

The budget provides a $51.8 million deposit into reserves that would bring the balance to nearly $1.5 billion hitting a 5% target of general and school fund spending. It also raises local revenue sharing by $49.8 million, or 5%.

The new spending draws from $7 billion in surplus revenues from higher-than-expected tax collections in fiscal 2021 and 2022 and revenues expected through 2023 along with remaining American Rescue Plan Act relief and federal infrastructure aid. The state would also spend some of the surplus in the current fiscal year through budget revisions. The proposed budget for fiscal 2023 would roll back over four years the state’s retirement tax and raises the state’s earned income tax credit.

My Stock Dropped Over -20% – What Should I Do?
Puerto Rico’s December revenues 28% ahead of projections
New York AG will seek sanctions on Trump, lawyers over ‘false’ court filings in fraud suit
Directional Vertical Strategy with Protection from a Shorter Duration Vertical (Members Preview)
Do Dogecoin’s (DOGE) and Shiba Inu’s (SHIB) stalled rallies mean the memecoin trend is dead?