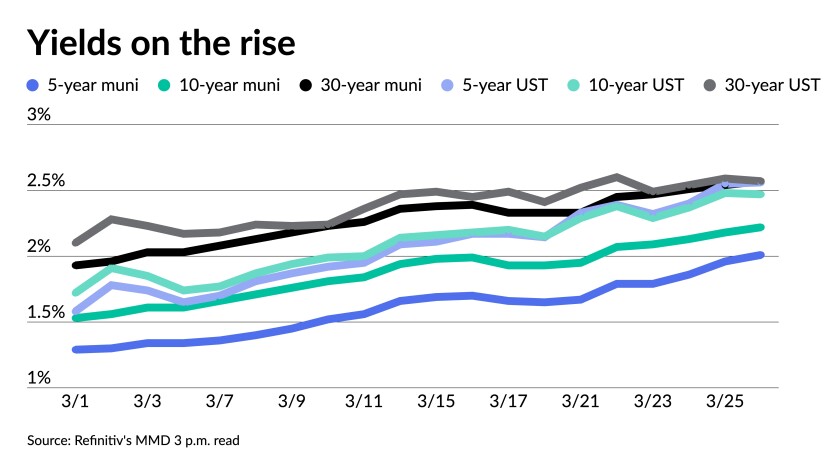 Municipals were weaker Monday, moving the five-year muni above 2% while the U.S. Treasury curve inverted and equities ended in the black.

Triple-A municipal yield curves saw cuts up to six basis points on the short end while the three- and five-year UST ended higher than the 30-year.

Fund outflows continued for the sixth week in a row, totaling negative $1.5 billion, bringing the year-to-date total to negative $12.86 billion. The amount of investor bids wanteds in competition has remained staggeringly large, nearly double the three-year average — including one day with $1.6 billion — indicating persistent market liquidity imbalance, he said.

Institutional bids wanted volume on Bloomberg was the heaviest since the week ended April 3, 2020. The total par amount out for the bid was $6.3 billion, more than double the 52-week average of $3.1 billion and 20% more than the previous week’s total, according to CreditSights strategists Pat Luby and John Ceffalio.

Although trade volumes have risen this year, they said muni exchange-traded fund secondary market turnover has increased at a quicker rate than bond trading. Daily muni ETF turnover averaged 5% of the total par amount disclosed by the Municipal Securities Rulemaking Board in 2021. ETF turnover has climbed to 9% of all bonds traded this year, and it averaged 13% last week.

“No doubt some market participants are using the liquidity of the ETFs in order to be able to sell quickly, but we note that even though mutual fund flows are net negative and bid wanted volumes have risen, investors have been net buyers of munis and muni ETFs this year, although the pace of buying has slowed down,” they said.

Last week, customer “buy” trades outnumbered “sell” trades by an average of $1.5 billion each day, down significantly from the $1.7 billion average for the week ended March 18, they said. In 2021, “buys” exceeded “sells” by an average of $2.4 billion per day and has dropped to $2 billion per day this year, as of March 25. Even though muni mutual funds have lost $23 billion this year, muni ETF holdings have climbed by $3.4 billion, as of March 23, according to CreditSights strategists.

Last week, the ICE muni credit indexes narrowed their spreads, although variances in length distort some of the market’s relative moves, they said.

The 10-year single-A GO benchmark yield spread widened from +28 on March 18 to +32 on March 25, while the single-A revenue yield decreased from +51 the week prior to +50 on Friday. Last week, the ICE Single-A Index tightened by seven basis points.

“We expect that this week’s new issues will be priced to quickly clear the market, pressuring primary market spreads wider,” they said.

Due to a smaller buyer base offering less liquidity, credit spreads continue to widen, particularly on less protective structures and/or poorer assets, according to Block.

He noted that coupon spreads have also widened with the spread between a 5% and 4% coupon at around 25 basis points.

“Credit spreads are also likely to continue widening as investors take a defensive posture and increase credit quality,” Block said. “Our base case through at least April is for tax-exempt underperformance on waning investor demand, driven by volatility, inflation, higher rates, and seasonal factors taxes.”

Treasury yields rose on the short end and equities ended in the black.

Learning from history
After the recent Federal Reserve rate hike, yields have risen and the yield curve flattened.

“Such behavior is not unusual,” said Ned Davis Research Chief Global Macro Strategist Joe Kalish. “Although cases are limited, the decline in Treasury bond futures thus far exceeds the median decline between the first and second Fed rate hike since 1980.”

Looking at past hiking cycles, he said, yields trend higher after the first rate increase, and are “flat to modestly higher” in the weeks after the second hike. “Credit spreads tended to meander in the weeks surrounding the second rate hike,” he added.

Since 1980, rates were lifted at least twice six times, and in each case “the yield curve flattened between the first and second rate hikes,” Kalish noted. “In cases with a short time span between hikes, the curve flattened a median 13 bp, a little more than what we have seen thus far, although the curve is a lot flatter today than in most other cases.”

In nearly all hiking cycles since 1964, he said, “the yield curve continued to flatten in the weeks and months leading up to the second rate hike and following that hike.”

Where do yields go from here? Mark Dowding, Chief Investment Officer at BlueBay Asset Management, said, “Although we can see how yields may rise further in coming days, based on our medium-term views, in the short term it is possible that rates have sold off as much as they need to.”

Last year, he said, yields peaked “at the end of March and we wonder whether there may be a repeat of this pattern in 2022.”

And while quarter-point hikes “may do little to slow growth or inflation in the coming year, with real rates remaining deep in negative territory,” he said, he believed the Fed’s plan to simultaneously do quantitative tightening, would make the panel “less inclined to become overly aggressive on rates, especially against a backdrop of ongoing geopolitical uncertainty.”

But should the Fed move to half-point rate hikes, it will create a more unpredictable situation. “Financial markets have become addicted to policy support in recent years and could be vulnerable if retail faith in buying stocks is challenged in weeks to come,” Dowding said.

“A more aggressive Fed creates a more challenging backdrop for risk assets,” he added. “A gradual hiking cycle appeared to constitute little risk to ongoing expansion, but a more unpredictable path for rates will inevitably raise recession risks. This uncertainty may also demand a more sustained increase in risk premia — a factor that may also be supported by ongoing geopolitical risks, which seem unlikely to disappear any time soon.”

The Department of Water and Power of the City of Los Angeles (Aa2//AA-/AA) is set to price Wednesday $334.555 million of power system revenue bonds, 2022 Series B. Goldman Sachs.