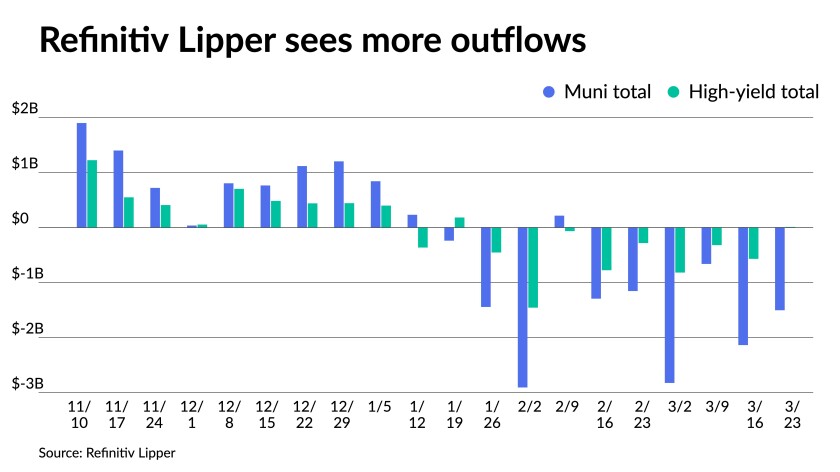 Municipals were hit hard Thursday with up to nine basis point cuts on the short end, but the damage was felt across the curve. U.S. Treasury yields rose while equities rallied in another see-saw day for markets.

Trading was weaker out of the gates, with large blocks of high-grades changing hands at higher yields.

Municipals simply cannot ignore rising U.S. Treasuries, which are directly correlated to the Federal Reserve’s actions and comments from the Fed chair. Mixed in with the war in Ukraine, global supply chain issues and the resulting inflation that has come with all of it has roiled markets, municipals included.

“There is still outsized volatility and liquidity challenges that lie ahead, but maybe more extended relief is not too far off,” said Jeff Lipton, managing director of credit research at Oppenheimer Inc. “Muni yield movements are closely following the volatility very much on display in the Treasury market and it would likely take a tempering of such volatility and/or a more compelling technical muni backdrop to catalyze enduring market conviction with sustained outperformance.”

Continued weakness in the municipal bond market Thursday kept skittish investors on the sidelines worrying about everything from market volatility to rising rates and recession, according to John Farawell, head of municipal trading at Roosevelt & Cross.

“Muni wise, a lot of investors are shell-shocked today because we are off another five basis points,” he said, as the continual weakness sparked increased nervousness.

Although higher absolute yields and improving percentages have brought a lot of retail investors, banks and insurance companies back into the municipal market, they would rather see some more daily stability of rates than weakness, he said.

“Seeing continual weakness in municipal bonds makes a lot of people nervous,” Farawell said. “They like to see a more stable market and like to see a bottom. They are hesitant to jump into the market when they see the constant weakness and the market dropping every day.”

“We have seen major adjustments since the beginning of the year, so that’s quite an adjustment and people are not used to seeing this type of unusual situation,” he said.

Investors are watching the Fed, Farawell said, and worry about the future of the market.

“People are concerned after this if we are going to be in a recession and looking at a tightening curve,” he said.

“There is a lot of nervousness right now because rates seems to go up every day,” Farawell said.

“The absolute yields have brought back retail, banks, and insurance companies due to the rise in rates, but they like to see steadiness and don’t like to see it getting cheaper everyday,” he added.

Per Refinitiv Lipper data, municipal mutual fund flows have been negative for six weeks. However, Oppenheimer’s Lipton expects a period of inflows on the horizon, albeit the duration will be determined by UST market volatility, geopolitical concerns and general investor sentiment against a hawkish monetary policy wall.

“Since the beginning of the year, we have remained steadfast in our assessment of the muni asset class in terms of its continued ability to deliver predictable tax-exempt cash flow amid a backdrop of resilient credit quality,” he said.

The Fed took the first step toward tightening its benchmark rate, while interest rates are low, which will be in place even after the central bank completes its tightening sequence. Lipton said the futures market expects the rate hiking cycle to end next year and a new easing cycle to begin in 2024.

“All of this is telling us that we are not embarking on a protracted course of significantly higher interest rates. But past performance is no guarantee of future results,” Lipton said. “Thus, past Fed tightening cycles should not be a determinant of municipal yield behavior during the current Fed rate hike sequence.”

However, for many market participants, he said, the historical muni yield trajectory during periods of rising interest rates may serve to justify expectations. Historically, Fed tightening efforts have been linked to the start of a recession, although this is not always the case. Fed cycles are designed for a variety of reasons, and not all of them are made equal.

This one will be accompanied by a reduction in the Fed’s balance sheet, with the goal of removing previously unheard-of amounts of stimulus that were required to keep the economy afloat during the pandemic, according to Lipton.

While the Fed might raise rates beyond what futures markets expect, such a scenario would be dependent on the duration and depth of inflation, as well as the level of transitory runoff that happens during the cycle, he said.

During and after the Fed rate rises, Lipton said, a well-telegraphed and carefully coordinated tightening sequence without sudden and/or unexpected actions might be beneficial to muni performance. The current atmosphere is significantly different from the one that surrounded the 2013 taper tantrum, he said. A favorable credit environment with little or no default activity might also help performance during this period.

Focus remains on Fed
Talk this week has turned to whether the Federal Reserve will raise rates 50 basis points when they meet next in May. Federal Reserve Board Chair Jerome Powell said if conditions were appropriate, a half-point hike was an option.

Other Fed officials speaking this week opined on the matter. Federal Reserve Bank of Chicago President Charles Evans said he is “open” to the larger raise, but said he’d be “comfortable” with a series of quarter-point increases.

Federal Reserve Bank of San Francisco President Mary Daly, said the Federal Open Market Committee will raise 50 basis points, if warranted. Federal Reserve Bank of Cleveland President Loretta Mester would like the Fed to be aggressive earlier in the cycle and wants a 2.50% by year end, which would require some larger hikes. Richmond Fed President Thomas Barkin also backed a bigger hike if inflation doesn’t wane.

“We think it is likely that the Fed will front load rate hikes, assuming the data evolves in line with current expectations for continued strength in the labor market, with potential for a 50 bp hike in May and then a 50 bp hike again in June,” said Wilmington Trust Chief Economist Luke Tilley and Senior Economist Rhea Thomas.

Then, they said, the Fed could pause “to assess the impact of hikes.”

However, “if month-over-month inflation readings start to show signs of moderation, we think it is possible that the Fed could slow its pace of hikes relative to current projections,” Tilley and Thomas said.

In previous hiking cycles, the Fed made larger hikes, they noted, but two major differences exist between then and now. First, with near-zero rates a 50 basis point hike is “much larger in a relative sense than a 50 bp hike in an earlier cycle.”

The second difference is increased communication. “In 1994 and 1995 there was no forward guidance from the Fed,” Tilley and Thomas said. “In the current environment, the forward guidance over the past three months has already pushed market rates (such as the 12-month or 2-year Treasury) up more quickly than any previous rate hike cycle. This lessens the need to do large hikes at upcoming meetings.”

Edward Moya, senior market analyst at OANDA, has stated a 50 bp lift in May is possible, but doesn’t expect a soft landing. “The Fed most likely won’t be able to navigate a soft landing as geopolitical risks will continue to keep upward pressures on prices and force the Fed into a difficult decision later this year.”

The choice will be “tighten policy so much that it sends the economy into a recession, or it will once again have to flip flop and prevent policy from becoming too restrictive,” he said.

“The Fed’s Summary of Economic Projection reads like a fairy tale,” according to Vincent Deluard, global macro strategist at StoneX. “The fed funds rate will never rise above 2.8% but inflation will magically drop to its long-term target of 2.0% with perfect precision, while the economy remains at full employment. There is no precedent for this.”

While then-Fed Chair Alan Greenspan engineered a “miraculous soft landing” in 1994, circumstances today are quite different, he said. “Inflation was running at just 2.7% when the hiking cycle started, and he still had to raise the fed funds’ rate to 6% before pausing,” which makes him doubt “today’s Fed promises that a 2.8% fed funds rate will cause double-digit inflation to fall back to 2%.”

Two scenarios remain possible, Deluard said. If the economy is as strong as the Fed suggests, seven 25 bp increases won’t tame inflation. If the economy and inflation are slowing as fiscal stimulus dries up and gas prices rise, he said, “the Fed is making the policy blunder of tightening into a recession.”

And, yield curve inversion is often seen as a precursor to recession. Goelzer Director of Portfolio Management Gavin Stephens sees the 2-10 inverting, but notes inversion doesn’t always lead to a recession.

In fact, he said, an inversion now probably would not signal a recession because the economy is “quite strong.” Plus, he prefers the 3-10 curve as a recession indicator.