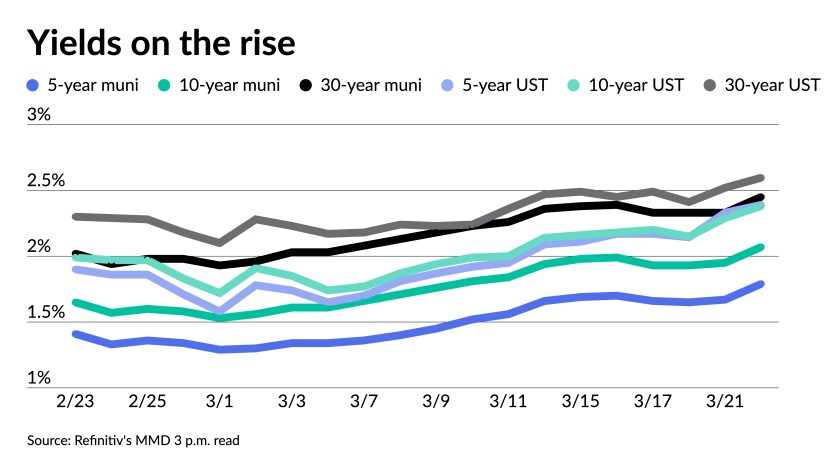 Triple-A benchmark yields were cut up to 12 basis points, with the asset class unable to ignore the ongoing pressure from U.S. Treasuries, which saw yields rise another basis points .

The hawkish comments by Federal Reserve Board chairman Jerome Powell have raised investor expectations for a 50 basis point rate hike at the next FOMC meeting just as municipal valuations are at historically attractive levels, according to Anthony G. Valeri, executive vice president and director of investment management at Zions Wealth Management.

“Muni bonds entered the year with very expensive valuations, but valuations are back to their most attractive levels since late 2020,” he said.

Bonds out for the bid was also met with an active new-issue calendar pricing Tuesday.

An elevated supply calendar and ongoing municipal bond outflows could be a headwind in the near-term, Valeri said. Bond Buyer 30-day visible supply sits at $13.55 billion. Deals being posted on MuniOS show a POS for $360 million deal for the Los Angeles Department of Water and Power, a $330 million Boston MA general obligation deal and $1.1 billion of taxable Dallas-Fort Worth Airports.

Because munis underperformed corporates last week, some taxable investment-grade investors may have a limited window of opportunity to add munis to their portfolios, said CreditSights strategists Pat Luby and John Ceffalio.

“With the risk-off market conditions and the recent wider spreads offered in the primary market, taxable investment-grade credit buyers may see some opportunities this week in the new-issue market to add munis to a portfolio as yields that could make sense compared to the after-tax yields on corporates,” they said.

The penalty for buying munis can be reduced by buying double-exempt bonds for taxable investors subject to a state and federal 21% corporate income tax. When compared to similarly rated corporate bonds, they said local double-exempt municipals may offer a marginal yield boost.

Over the previous four years, banks, insurance companies and other financial institutions have had few opportunities to justify adding tax-exempt securities to their portfolios, but CreditSights strategists believe this week’s calendar will help.

Mutual fund outflows will continue to be a fundamentally disruptive factor in a market structure that has been too propped by fund buying, said Matt Fabian, a partner at Municipal Market Analytics.

“But benchmark yields have now reattained, roughly, longer-term average nominals and are thus likely at a level that could sustain demand under normal market conditions; this would particularly be the case for more defensive coupons,” Fabian said. “And outflows could, potentially, begin to reverse.”

He said a hypothetical market rescue now could help contain looming downside volatility from de minimus-related losses to lower coupons, but these points will be for naught if fund outflows continue or accelerate. He said it has been years since the municipal demand side has operated well without a strong push from the funds.

“Muni bond inflows, which were such a powerful support for most of 2021, have faded,” Valeri said. “Muni bond fund redemptions have historically been elevated during tax season so redemptions may remain high and not just due to Fed rate hike fears.”

Muni CUSIP volume rises
Monthly municipal volume rose on a month-to-month basis in February, according to CUSIP Global Services. The aggregate total of all municipal securities, including municipal bonds, long-term and short-term notes, and commercial paper, rose 2.8% versus January totals. But on a year-over-year basis, overall municipal volumes were down 11.6%. Texas led state-level municipal request volume with a total of 108 new CUSIP requests in February, followed by New York with 68 and California with 60.

For muni bonds specifically, there was an increase in request volume of 2.8% month-over-month, but they are down 9.7% on a year-over-year basis.

“Issuers have been active this month as they balance a complicated set of dynamics that includes significant geopolitical instability, rising inflation and the threat of rising interest rates,” said Gerard Faulkner, direct of operations for CUSIP Global Services.

Will May bring a 50 bp hike?
Talk of the possibility of a 50 basis point rate hike at some point, perhaps at the Federal Open Market Committee’s May meeting, remains rampant after Fed Chair Jerome Powell said the panel would move faster if needed.

Federal Reserve Bank of St. Louis President James Bullard, speaking on Bloomberg TV Tuesday, repeated his call for aggressive action to stop inflation and that a 50 basis point rate hike “should be in the mix.”

At the latest FOMC meeting, where rates were bumped a quarter point, Bullard dissented in favor of a larger hike.

“Bullard has it right, let’s take the pain now and get inflation under control sooner and get on with it,” said AE Wealth Management CIO Tom Siomades.

While a half-point increase at one meeting could happen this year, BCA Research said, it would require “long-maturity inflation expectations [to] become unanchored or core PCE inflation prints consistently above 0.30%-0.35% per month.”

While “Fed interest rate projections show that seven out of 16 FOMC participants think that at least one 50 bps rate hike will be necessary,” BCA sees inflation easing in the coming months and the Fed sticking to “a steady pace of tightening (25 bps per meeting).”

But unlike previous cycles, Morgan Stanley researchers say widening credit spreads won’t halt the rate increases this time. “Credit spreads have widened rapidly in recent weeks, and the magnitude of recent spread moves mirrors those in 2015-16 and 2018-19, when the Fed paused monetary tightening,” they said. “This time around, the bar for a policy pivot is substantially higher, as long as credit market functioning is not impaired.”

The reasons this time is different include: spreads had been tight by historical standards, meaning the increases won’t have as big an impact on the economy and inflation is surging.

“The Fed therefore may feel more pressure to continue on its telegraphed policy path toward tightening, even if policymakers would prefer to take a wait-and-see approach on credit market developments,” Morgan Stanley said.

But the Fed, according to David Kelly, chief global strategist at JPMorgan Asset Management, “sometimes appears to be trying to steer a big boat, through violent rapids, armed only with a small paddle.”

And despite their efforts, he said, “the reality is that forces well beyond their control will mostly determine the fate of the economy.” He sees strong consumer and private fixed investment spending propelling growth above its long-term potential.

“Importantly, it is hard to see how even the seven interest rate hikes the Fed projects for 2022 will put a dent in this growth,” Kelly said. “The most interest-sensitive sectors of the economy, home-building, capital spending and, to a lesser extent, auto sales, are all experiencing massive pent-up demand which is unlikely to be reduced significantly by modest increases in very low interest rates.”

And if the economy grows strongly, he asks, will the Fed raise rates more aggressively?

“If the Fed is sufficiently determined to battle inflation in the short-run and frustrated in its lack of short-term success,” Kelly said, “America may have reverted to an era of higher and more normal interest rates by the time the inflation tide finally begins to ebb.”

China sharply rebukes US over decision to shoot down spy balloon
My Stock Dropped Over -20% – What Should I Do?
Gilead’s Stock is on Sale: Should You Buy?
Bitcoin clings to $23.5K as trader says BTC ‘identical’ to 2020 breakout
Visa’s crypto strategy targets stablecoin settlements