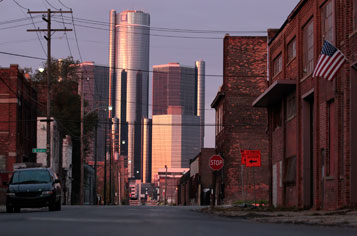 Moody’s raised the rating Wednesday one notch to Ba2 from Ba3 and signaled by leaving a positive outlook on the rating that another upgrade could be in the offing if the city maintains its positive fiscal trajectory. The city has about $2 billion of debt outstanding.

The city suffered pandemic hits on multiple fronts from the loss of income taxes due to non-residents working remotely and plummeting wagering taxes from shuttered casinos.

“Despite those pressures, Detroit posted its sixth consecutive operating surplus in fiscal 2021 and is on pace for another strong year in fiscal 2022,” Moody’s analysts David Levett and Robert Weber said in the report. “The upgrade to Ba2 reflects the city’s healthy financial position supported by strong management that has successfully navigated challenges, such as weak property tax wealth, volatile revenue structure and limited revenue-raising flexibility.”

Remote work will remain a strain but wagering taxes received a boost last year from newly implemented collections on internet gaming, according to a revenue estimating conference’s latest report. While the pandemic hit revenues hard, federal aid and early action to cut spending cushioned the pain and paved the way for fund balances.

Significant bonded and pension debt weigh on the rating and while fixed costs are moderate, they are on the rise with pension contributions set to resume in fiscal 2024. The city is “well-poised” for further strengthening but risks loom and if revenues don’t keep up, cuts will be needed to maintain fiscal momentum, Moody’s warned.

“The positive outlook reflects the likelihood that the rating will move upward if financial operations and reserves continue to strengthen, positioning the city well to address growing pension costs and future revenue downturns,” Moody’s said.

Mayor Mike Duggan on Monday unveiled a proposed budget for the fiscal year beginning July 1 that funnels $31 million from a $130 million fund balance that would bring the reserve to $138 million and another $30 million would go to boost a scheduled $60 million contribution to the special Retiree Protection Fund (RPF) set up to help cover future pension contributions.

Duggan said reserve deposits planned over the next three years — $15 million in 2024 and $5 million in 2025 — would bring the account to 12% of budget. The goal is to eventually reach 15% in hopes that will help lift the city from junk territory, Duggan said.

If the deposits are approved, it would bring the RFP balance to $460 million, providing a cushion to help meet annual contributions that are expected to range from $130 million to $200 million in the coming decades.

That’s a good thing, but “the scale of the city’s pension contribution challenges will be heavily influenced by the investment returns of its pension systems and length of amortization, which was recently shortened in one plan to 20 years from 30 years and part of our baseline assumption,” Moody’s said.

Duggan told council members Monday he intends to return to the federal bankruptcy court to challenge the police and firefighters fund’s decision to amortize legacy pension obligation over 20 years as stakeholders agreed to the 30-year term during bankruptcy negotiations. Duggan may also seek state legislation giving the city a greater say on the fund’s decisions.

The city’s 2014 plan of adjustment required just a $20 million contribution from the general fund to pension plans through 2019 and no contributions from fiscal 2020 through fiscal 2023.

When contributions resume in fiscal 2024, the city owes an estimated $131 million based on the police and fire fund change to pay down legacy obligations over a 20-year period instead of 30 years and the general employee fund remaining at 30 years.

If the city prevails in its efforts to amortize both legacy funds over 30 years, the contribution drops to $117 million. If the other fund moves to a 20-year term, the payment rises to $141 million.

“If assumptions hold, the trust would be available to smooth payments for 15 years, limiting annual growth in payments to about $5 million annually. However, Detroit’s contribution requirements will be heavily influenced by the investment returns of its two pension systems,” Moody’s said.

With city contributions on hold, payments into the funds have mostly been limited to funds coming from the other sources, such the Great Lakes Water Authority and from the so-called “Grand Bargain” struck as part of the bankruptcy, which provided more than $800 million from private foundations and the state to stave off deeper pension benefits.

The Police and Fire Retirement System defends its move, saying it must act in the best interest of retirees with its investment committee charged with that task as part of the bankruptcy exit plan.

“The PFRS has a fiduciary obligation is to ensure that benefits are paid to retired police, firefighters and their beneficiaries,” PFRS Chairman Ron Thomas said. “Trustees have heard from our actuarial and other financial advisors that have run numerous what-if scenarios based on multiple funding models …the 20-year model is clearly in the best interest of retirees.”

The system praised Duggan’s budget proposal to funnel more to the RPF. “We appreciate the mayor and city administration’s stewardship of the city and ability to manage its budget amid the pandemic,” Thomas said. The funds pay out $350 million annually.

Other strains weigh on the city’s finances. Detroit’s trajectory is especially susceptible to an economic downtown as it’s heavily tied to the domestic auto industry and resident incomes are very low, Moody’s said.

Bright spots on the development front include a series of new projects with General Motors, Ford, and a number of auto suppliers having announced major investments expected to create thousands of jobs, Moody’s said.

“Detroit is also a logistics hub, a position that will be bolstered by a second international crossing that is being constructed, the Gordie Howe International Bridge,” Moody’s said. Huntington Bank, which recently absorbed Chemical Bank and TCF bank, is making Detroit its commercial banking headquarters with a 20-story building under construction.

Moody’s anticipates the city’s bonded debt to grow with another $75 million of a $250 million voter-approved general obligation authorization to remove blight still on the books following a $175 million issue last year and another $71 million in voter-approved authority for capital. Ahead of last year’s sale, S&P Global Ratings returned the outlook on its BB-minus rating to stable from negative.

The city must present balanced budgets that look ahead four years to the Detroit Financial Review Commission annually to win a waiver from direct state oversight. According to the 2020 census, the city has a population of just under 640,000, making it one of the 30 largest cities in the U.S. and the largest in Michigan, Moody’s said.