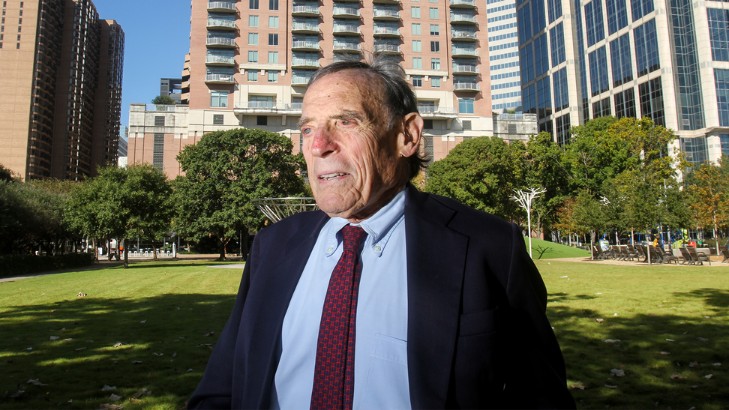 Marvy Finger recently sold half his portfolio of Sunbelt apartments for $2 billion, saying the Covid-crazed rental market has peaked. The buyers, pointing to a 20-year low vacancy rate, disagree.

For a real estate tycoon, Marvy Finger’s second-floor offices in a low-slung Houston office building are as modest as the first apartment buildings he erected nearly 60 years ago — and still owns. “I like simplicity and livability,” says the 5-foot-5-inch, slightly stooped 86-year-old, whose unassuming uniform consists of khakis, oxford shirt, penny loafers and an Hermes tie offset by Timex watch. His go-to drink is Johnnie Walker Black Scotch and he has a similar taste for value in his business dealings too.

“It’s not sustainable,” Finger says, of the 25% increase during the Covid-19 pandemic in apartment rents in key sunbelt cities like Tampa, Austin, Nashville and Houston. He points to rampant new construction nationwide, with so many buildings springing up that 600,000 new units came to market last year — nearly double the previous record. Meanwhile, those federal stimulus checks that fattened renters’ wallets have been mostly spent and price increases for other necessities, like energy and food, are competing for their remaining dollars.

“I am absolutely programming for a major correction,’’ says Finger. That’s why this past December he sold half his portfolio — 15,000 units in Houston, Dallas and Atlanta — to real estate investor Greystar for $2 billion. He thought it was a rich price, equal to about 33 times expected 2022 net operating income (rental income minus expenses) of $60 million. Figuring the package would have fetched some 75% less before Covid-19, Finger concluded, “it would be irresponsible not to sell.”

Yet while Finger was a happy seller, Greystar was a happy buyer, says Kevin Kaberna, its investment director, who admires Finger’s vigor and calls him a “prolific developer of the nicest assets in best locations.” With 54,000 units in Houston, Greystar was already the biggest landlord in town and Kaberna insists the market remains fantastic–he points out the nationwide vacancy rate is down to 5.2%, the lowest in at least 20 years, with outright shortages in the hottest markets. The biggest tailwind trend, says Dallas-based real estate consultant Ron Witten, is the “undoubling” of households as some Millennials (including those who moved home during the early pandemic days) leave their parents’ nests, and others already out on their own jettison annoying roommates.

How High Can The Rent Go?

With apartment vacancy rates low and falling, landlords pushed through record rent hikes in 2021. Billionaire Marvy Finger thinks a flood of new rental units will hold down future increases, but other developers are more bullish.

So what did Finger hold on to? He kept some trophies, like One Park Place, a high-end tower he built in downtown Houston adjacent to Discovery Green park, and 500 Crawford, a luxe mid-rise across the street from Minute Maid Park, where the Astros play. And some properties with sentimental value, like Colony Oaks, the very first two-story walkup complex that he built in Houston in 1960; selling that “would be like selling my first born.”

Significantly, Finger also retained properties that he thought had more appreciation left in their underlying dirt. One fully leased 152-unit complex he built in the 1960s is on seven acres adjacent to the private Duchesne School. “The school now has nowhere to grow but on to that land,” he muses. The land is currently appraised by the county at $30 million, but he thinks it’s worth a lot more, especially in a city like famously un-zoned Houston, “the only major city that really has no restrictions to entry,” he says. “It’s certainly allowed me to develop at will.” And eventually, to redevelop. Which is why he says, “I think what I’m holding on to is worth more than what I’m selling.”

Finger grew up in an entrepreneurial family. In the 1940s his father Hyman moved from the piney woods near Beaumont, Texas and started Finger Furniture. Marvy grew up sweeping floors, selling furniture, and watching as Hyman made the mistake of bringing his brothers into his business. “I saw the clashes he had with his family and I knew I didn’t want to be a part of it,’’ says Finger, whose two brothers died years ago. Finger received an early discharge from the Army after a disorder led to most of his stomach being removed. In his early 20s he learned from mentor Ben McGuire how to combine loans from insurance companies with mortgage insurance from the Federal Housing Administration to build two-story, wood-frame, brick veneered apartments with 100% financing. “You really could fully leverage them, without any equity at all,’’ he marvels.

After successfully building dozens of middle-class apartments, Finger almost lost his shirt on his first office building project, which became one of the infamous “see-through” towers that languished empty, with unfinished interiors after the 1982 oil bust. He resolved to stick with apartments but decided to venture beyond the edges of Houston’s endless sprawl—going all the way to Chicago, where he met attorney Barry Nekritz. “The thing that made Chicago interesting to him was that it had the best transportation network in the country. You could get on a train and into the city and live near a food store,’’ says Nekritz. In Schaumburg, Illinois, Finger’s contractors are now putting finishing touches on a new mid-rise complex located nearby an older (but still nice) one he put up 35 years ago. Says Nekritz, “I’m 83, but he won’t let me retire because he won’t retire.” Finger still enjoys tennis, though a fly-fishing accident in Belize claimed one of his eyes a few years ago.

Nearly 30 years ago Finger’s projects attracted the attention of the managers of Harvard University’s now $54 billion endowment, who beginning in 1994 teamed up with him to build 16 projects, many of them in south Florida. Chip Douglas, who ran Harvard’s real estate investments back then, recalls Finger’s pursuit of “the art of building with quality and making the numbers work.” At one building “he didn’t like how the pool turned out so he ripped it up and started over.” After a decade, Finger bought out most of Harvard’s interest, but that prestigious relationship opened doors to all the capital he would ever need. “They didn’t know Finger from Adam, but they sure as hell knew the Harvard seal,’’ he says.

Since then, the builder has signed on other big name equity partners, including Houston billionaire Fayez Sarofim and the children of the late pipeline tycoon Dan Duncan. He has also built bigger, taller projects, such as the Museum Tower in Houston, appraised by Harris County at $100 million.

Along with tapping Texas money, Finger has built off his deep Houston connections. In 2006, he heard from his daughter Jill Jewett, then head of cultural affairs for Houston Mayor Bill White, that billionaire Rich Kinder was working with the city to build a city park called Discovery Green that would transform downtown. Forewarned, Finger scooped up a lot and set to work on a 340-unit high rise called One Park Place that would overlook the new park. Eyebrows raised; there hadn’t been a residential tower built downtown in 20 years. He kitted it out with a replica of the pool at the Ritz-Carlton in Maui and lured a high-end grocery store to the ground floor. “The number one amenity is a food concession,” he says. Still, after the global financial crisis hit in 2008, tenants were hard to find, and it took years to fill the units. “I never thought about risk on that project,” he says now. The building is valued at $158 million. As Houston boomed post-Great Recession, he followed up with a string of luxe projects like the eight-story 500 Crawford, across from Minute Maid Park, home of the Astros, and now appraised at $91 million. No vacancies.

Finger likes to daydream about what might someday replace the 20 acres with 540 garden apartments at the Creole On Yorktown that he built in the early 1970s with financing from Ace Greenberg at Bear Stearns. It was the first and last time he ever incorporated an on-premises bar (a security nightmare). He almost lost the complex to bankruptcy in the aftermath of the 1973 oil crisis, “but nobody wanted to buy a negative cash flowing property.” Eventually, “Houston’s market did turn,” and he’s owned it ever since, with the tony Galleria neighborhood growing up around it. After the next oil bust in the early 1980s and the savings and loans crisis, Finger picked up some gems at bargain prices from the Resolution Trust Corporation, formed to liquidate the failed S&Ls. His purchases included a three-acre parcel in the Galleria where he built a modest complex (valued at $10 million). The site, now adjacent to an Omni Hotel and the tony Houstonian Golf Club & Spa, could someday yield to a redevelopment worth many times that.

In late 2019 Finger raised $90 million to erect a new luxury tower on another nearby plot. But he called the project off even before Covid-19 hit, concerned that an inverting yield curve signaled economic trouble ahead. With today’s high demand, that building would have filled up fast, but he doesn’t regret pulling back. “The fundamentals have to make sense.” When they do, Finger (plus heir apparent daughter Jill and son Edward) has the land on which to erect a number of high-rise redevelopments. He’s in no hurry. “What’s happening now can’t last,” he says, referring to the rampant construction of apartment buildings. In Houston, for example, builders currently hold permits to build 42,000 units, more than twice the normal number. Prices for labor and materials are surging. Having seen bubbles before, Finger is content to wait. “We’re going to get overbuilt again. The glut is definitely coming.”