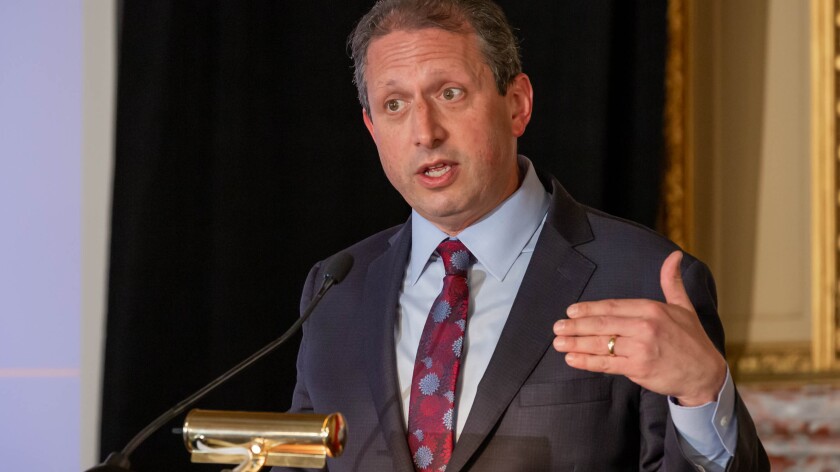 Budget season has kicked off in New York City as the first public comments on the nearly $100 billion spending plan were heard this week. The city is in good financial shape, analysts said, thanks in part to federal aid.

The City Council on Wednesday began the first of a series of public hearings that will run through the month on Mayor Eric Adams’ $98.5 billion preliminary fiscal 2023 budget and the $100 billion fiscal 2022-2026 capital plan released on Feb. 16.

By the end of April, the mayor will release a revised executive budget, the Council will issue its response and hold a second round of hearings in May. Then the Council and the mayor and his Office of Management and Budget will negotiate adjustments. By law, the 51-member council must vote on a balanced budget by July 1.

“With over half of the City Council comprised of new members and a new City Council president, I am waiting to hear them articulate their budget/political priorities and how that meshes with Mayor Adams’ preliminary budget proposal,” Cure said.

“While there are more monies dedicated to reserves, totaling $6.1 billion out of a budget of $98.5 billion, a large portion, $3.8 billion is for retiree health benefits and should really be off-limits for other uses, such as closing future deficits,” Cure said. “Also, the city should strive to increasing reserves to around 15% of its budget given the volatility of economy (finance, tourism) and corresponding revenues.”

Adams has implemented a program to eliminate the gap (PEG) that has cut almost $2 billion in spending. This exceeded the 3% target set for most city-funded agency budgets in fiscal 2022 and 2023, the administration said, and helped close a $3 billion budget gap in fiscal 2023.

As part of PEG, the city employee headcount was cut in fiscal 2022 and 2023 by eliminating vacant positions. The administration deleted $500 million in unidentified labor savings from the budget.

“The fiscal year 2023 budget is New York City’s chance to invest in the services and infrastructure our city needs for an inclusive, resilient, long-term recovery,” Adams said last month.

Rein testified the CBC is recommending an additional 3% PEG which should be focused on increasing agency efficiency; taking action to mitigate the impact of a $650 million dollar city fiscal cliff in 2023 and the $1.3 billion federal fiscal cliff in 2026; and to commit to annual rainy day fund deposits of at least $500 million.

“The PEG which had been essentially dormant during the de Blasio administration, is being reinstituted with the bulk of the 3% cuts coming through attrition,” Cure said. “We will see if there is some flexibility in these cuts as some programs need a vacant position to be filled.”

Lander testified on Wednesday that while the city is reopening it is still grappling with many challenges caused by the pandemic.

He said adjusting to remote and hybrid work — and its impacts on office space and employment — was one of the greatest challenges to the city’s economic recovery.

“Going forward, I hope to see less finger-wagging and more creativity and collaboration from both the public and private sectors to reimagine office space and jumpstart the jobs and businesses of tomorrow,” he said.

The IBO predicts employment in the nation as a whole will exceed its pre-pandemic peak in the middle of this year.

“We forecast a continuation of the economic expansion during the succeeding years of the forecast period, albeit at slower rates of growth that decrease from 3.1% in 2023 to 2.2%,” IBO said.

While there are many causes for optimism, Lander said, there could be headwinds ahead.

“Property values rebounded in the most recent tentative property roll, residential real-estate transactions have been strong and tax collections to-date are $1.6 billion above the November forecast,” he said, adding, “We face great risks and uncertainties — Russia’s war on Ukraine, inflation, federal monetary policy, climate change — but the indicators point uniformly to an ongoing recovery over the coming year.”

Since the November budget plan was released, Lander said, the Office of Management and Budget has increased its tax revenue forecast by $1.6 billion.

“Since that is nearly the same as the year-to-date increase, with five months still left in the fiscal year, my office projects that actual year-end collections will be above OMB’s forecast by approximately an additional $1.4 billion this year and $800 million next year,” Lander testified.

Cure said it paid to be wary even as taxes — including property, income and business and sales taxes — are estimated to be higher than earlier projections.

“However, there are still risks going forward. These include tourism rebounding and the impact on the economy and property taxes related to hotel valuations,” Cure said. “Also, it is important to track office vacancy rates, return-to-office statistics and assessment of commercial buildings. In addition, New York City still lags in job recovery and may continue to lag if not all office workers return on a full-time basis and the impact on support services and jobs.”

On the expense side, Lander said, the city faces risks from under-budgeted expenses, such as overtime, homeless shelters and rental assistance.

Cure said political changes may also impact the budget process down the line.

“As with all budgets during this era, we will analyze how much the city is willing to fund a program once the federal relief measures are drawn down. This might be particularly relevant for school programs,” he said. “And while the state legislature seems likely to remain in Democratic hands with a willingness to help New York City, a change in U.S. Representatives and Senate to Republican control might also put pressure on federal funding for urban programs.”

Lander stressed the city should make wise use of the federal stimulus funds it has received.

“One critical lens on this year’s budget is the use of federal COVID aid. From fiscal 2020 through fiscal 2026, the city is expected to spend $26 billion,” he said. “We’ve already spent or committed roughly half of it, but that means there are equally as many choices to make about how we spend the rest.”

On Tuesday, Lander spoke at The Bond Buyer’s National Outlook Conference and announced his office had released “Checkbook NYC,” an interactive dashboard which tracks the city’s federal COVID relief spending.

The comptroller’s office has said federal aid is expected to total $26 billion by fiscal 2026. Through mid-February, the city has spent $1.16 billion of $3.30 billion in planned State and Local Fiscal Recovery Fund spending for fiscal 2022 and $1.7 billion of the $3.0 billion targeted to education.

During his keynote address at the conference, Lander said, one of the most important questions the city faces is how it emerges from the COVID crisis in ways that will make it more prepared to face any crises to come, whether it’s future pandemics, economic instability caused by war or rising tides and temperatures.

“Our task together, city and the municipal bond community, is to foster an inclusive recovery that heals the wounds of the pandemic, that binds us together more inclusively which makes us better prepared to weather future storms than we were for this one,” he said. “And to me, that is in so many ways what public finance is all about — investing now for the good of the long term.”

“Public finance is a critical link between the idea of progressive government — investing in the public good that will sustain us — and an effective government, where we are making sure to deliver on our promises,” he said.

New York City is one of the biggest issuers of municipal bonds in the nation. As of the first quarter of fiscal 2022, the city had about $38.13 billion of general obligation bonds outstanding.

That doesn’t include the various city agencies that issue tax-exempt and taxable bonds such as the Transitional Finance Authority or the Municipal Water Finance Authority, which have $41.64 billion and $31 billion of debt outstanding, respectively.

On Wednesday, the TFA plans to sell more than $1 billion of future tax secured subordinate bonds, consisting of an $845 million tax-exempt fixed-rate negotiated bond deal and a $200 million taxable fixed-rate competitive bond sale. Proceeds will be used to refund some outstanding bonds for savings.

Op-ed: Salesforce appoints ValueAct’s Morfit to its board and a proxy fight may loom ahead
92% of millennial homebuyers say inflation has impacted their purchase plans, but most are plowing ahead anyway, study shows
Trading Breakouts Strategy
NYSE’s Tuesday trading glitch explained — Why some of the trades may be busted
EY Germany to axe hundreds of jobs in post-Wirecard cost-cutting push