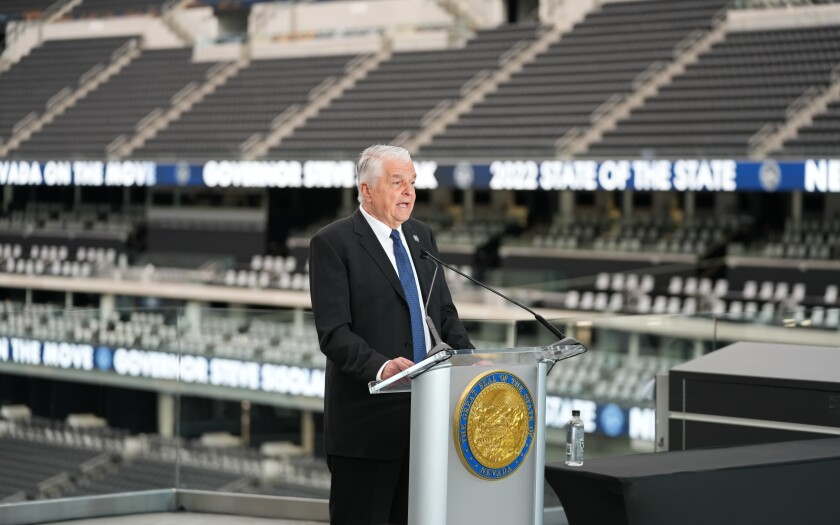 Nevada has doubled down on housing efforts with a $500 million “Home Means Nevada” initiative and the dedication of the majority of its private activity bond authority to affordable housing.

Nevada Gov. Steve Sisolak announced plans to tap federal funds for the housing initiative during an off-cycle State of the State speech delivered Wednesday at Allegiant Stadium in Las Vegas.

Traditionally, the Nevada governor only gives the speech every two years in conjunction with release of the governor’s proposed biennial budget. Nevada doesn’t have a regular legislative session during the second year of the biennium.

“We have too little supply to keep up with booming demand,” Sisolak said. “In the last decade, more than 400,000 people have moved into Nevada.”

The state will also use $4 billion from the federal Infrastructure Investment and Jobs Act to upgrade roads, bridges and water systems and another $500 million for broadband infrastructure, Sisolak said.

“As we work to grow the economy, we need great roads, bridges and highways to move materials and create jobs,” Sisolak said. “The good news is that, today, we’re actually ranked No. 1 of all states in infrastructure, and we’re in the top 10 for our roads and highways, but we’re about to make another leap forward.”

Sisolak’s housing initiative comes on top of the Nevada Housing Division’s announcement last week that $300.7 million, or 87%, of the state’s 2021 private activity bond authority has been earmarked for affordable housing.

The bond authority is expected to fund 14 affordable housing projects now under construction to produce 2,898 units by 2024. The developments in Reno, Las Vegas and North Las Vegas would contain a mix of senior and family units, and new construction and rehabilitated units.

The allocation represents the highest amount earmarked for state-led affordable housing development since the inception of the private activity bond program, according to Terry Reynolds, director of the Department of Business & Industry.

“We know that housing is a priority for Nevadans,” Reynolds said in a statement. “That’s why we’re ensuring that our bond utilization matches the needs of Nevadans to provide more affordable housing.”

Private activity bond authority allocated to the Housing Division is used to incentivize private developers to increase the number of affordable housing units built or existing units renovated by providing a mechanism for financing projects with a lower cost of capital than conventional financing can offer. Along with developer tax credits offered through the Low-Income Housing Tax Credit program, the apartment buildings are required to remain affordable, below-market residential rentals for a minimum of 30 years.