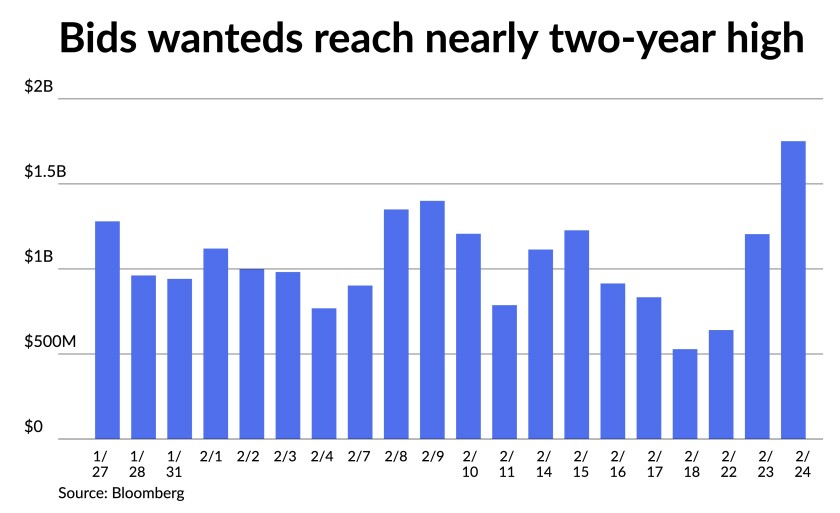 Municipal triple-A yields rose three to four basis points on Friday, losing up to half the gains they made Thursday, as U.S. Treasuries saw losses throughout the day but ended flat. Equities rallied hard after the European Union imposed sanctions on Russia and the U.S. indicated it would follow suit.

Municipals had a hard time keeping up with the volatility in UST, underperforming the moves late in the day after outperforming their taxable counterparts on Thursday.

Secondary trading was a mixed bag with some trades pointing to a much weaker market while a few firmer trades exchanged hands. Thursday’s bids-wanteds hit the highest level at $1.751 billion since March 2020’s COVID-19 selloff began.

All this comes as month-end positioning is in full force. The turmoil in Ukraine is compounding inflation concerns and has led to a flatter UST curve with munis along for the ride.

“The muni yield curve has continued flattening, with 10s30s and 10s20s yield differentials already reaching their lowest points in recent history,” they said. “The 5s10s curve was flatter during the peak of the COVID-19 crisis, pointing to the relative cheapness of the ten-year part of the municipal curve, which we continue to favor.”

Barclays strategists said lower yields should help high-quality tax-exempts and put a temporary halt to fund outflows, but they may also encourage issuers to become more active in accessing the primary market, which would provide a counterbalance.

The new-issue calendar for the upcoming week is $5.45 billion, with $3.30 billion of negotiated deals and $2.14 billion of competitive loans.

The largest deal of the week comes from the New York City Municipal Water Finance Authority with $793.83 million. Other notable deals include $500 million of taxable corporate CUSIPs from the Massachusetts Institute of Technology, and two deals — $300 million and $270 million of water system revenue bonds — from the Los Angeles Department of Water and Power.

Credit spreads are now relatively tight since there has been very little decompression, according to Barclays strategists. Nevertheless, they said given the present economic situation, lower-rated high-yield and investment grade yields may face further pressure in the near future.

Until recently, they said the taxable muni market has been performing quite well. The index spread has remained almost steady for the month of February, despite weak secondary liquidity, which contributes to stale values for less liquid bonds, while the corporate index has widened by 16 basis points during the same time period.

The yield differential between the two indices is over four standard deviations above its 12-month average, the biggest since the COVID-19 pandemic began, they said. The taxable muni market began to broaden on Thursday, probably due to increased issuance, although it still has an opportunity to catch up to corporates, they said.
Secondary trading
University of Texas 5s of 2024 at 1.24%. New York City TFA 5s of 2025 at 1.39% versus 1.41% Thursday. Wisconsin trans 5s of 2026 at 1.41%.

The Fed’s reaction
“Financial markets will remain on edge as this is just the beginning of the War in Ukraine, so the dip buying that occurred over the past two days will run out of steam,” said Edward Moya, senior market analyst at OANDA.

The release of the Fed’s monetary policy report reiterated that interest rate hikes will soon be appropriate, Moya said, adding the report noted that some supply bottleneck issues could remain for some time.

Next week, Fed Chair Powell will deliver his semi-annual testimony to both the House and Senate and after hearing from Powell, “investors will have a better understanding if they can completely write off that half-point rate increase in March.”

The Fed’s “favorite inflation gauge” hit the highest levels since 1983, Moya said, noting the core personal consumption expenditure index rose 5.2% in January from a year earlier, inline with expectations and well above the prior 4.9% reading.

“The likely impact from the Russian invasion of Ukraine could deliver another wave of pricing pressures that might make policymakers a little more anxious in tackling inflation,” he said.